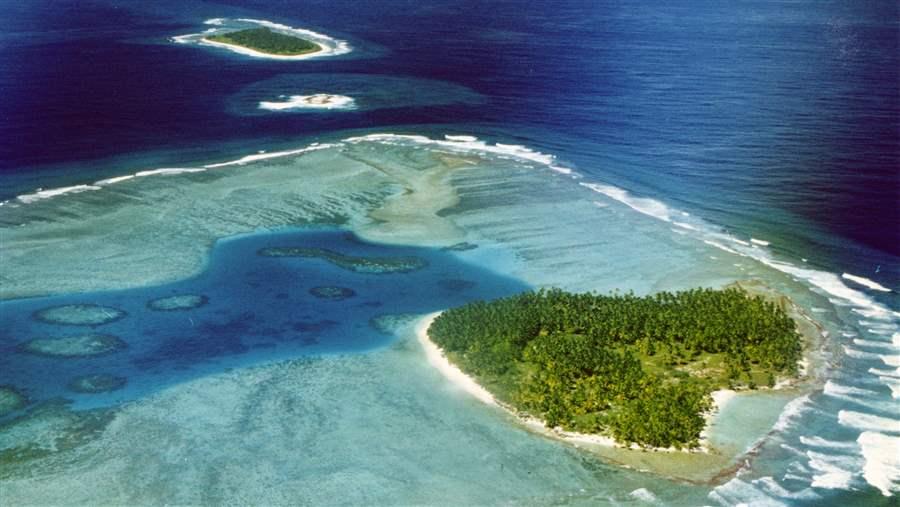 Middle Brother Island, Chagos Archipelago. The Chagos is by far the richest marine biodiversity under British jurisdiction with over 220 coral species and over 1,000 species of fish.

A new study  detailed in the July 2014 issue of Conservation Biology documents the longest ocean migration ever recorded for the endangered green turtle—nearly double the distance scientists believed these turtles could cover in a single journey.

Starting in the Indian Ocean’s Chagos Marine Reserve, the largest fully protected marine reserve in the world, the satellite-tracked turtle traveled about 4,000 kilometers (nearly 2,500 miles) to the coast of Somalia in Africa. Previously, scientists thought the longest migration was about 2,000 kilometers (about 1,250 miles).

The study’s findings demonstrate the importance of large, fully protected marine reserves in safeguarding highly migratory marine species. For green turtles, which can live over 80 years and weigh up to 700 pounds, the Chagos Marine Reserve provides a critical refuge and breeding ground during their early lives before they embark on their ocean migrations.

The Pew Charitable Trusts, through its Global Ocean Legacy project, worked closely with partners to help secure the April 2010 designation of the Chagos Marine Reserve by the British government.  That action resulted in protection for one of the most remote and unspoiled marine areas on Earth, containing up to half of the healthy reefs in the Indian Ocean. Spanning 640,000 square kilometers (about 250,000 square miles), it is about equal in size to France and more than 60 times the size of Yellowstone National Park in the United States.

The study also points to the groundbreaking research coming out of the Chagos Marine Reserve since its establishment. Rivaling the Galapagos Islands and the Great Barrier Reef in ecological diversity, the protected waters of the Chagos serve as a global reference site for scientific research in a range of crucial areas, including ocean acidification, coral reef resilience, sea level rise, fish stock decline, and climate change.