When you’re enjoying seafood, you probably don’t spend much time thinking about how fish actually get to your plate.

Not where they’re from or how they were caught, but something much more complex: how people figure out when and where it’s ok to fish and how much fish is safe to take out of the water.

The short answer is that researchers, fisheries managers, and others go through a scientific process to figure out the health and abundance of a particular fish population—and then set quotas, fishing seasons, methods for catching the fish, and other rules. Until now, they’ve done this one population at a time. But there may be a way we can improve the processes traditionally used to manage U.S. ocean fisheries. 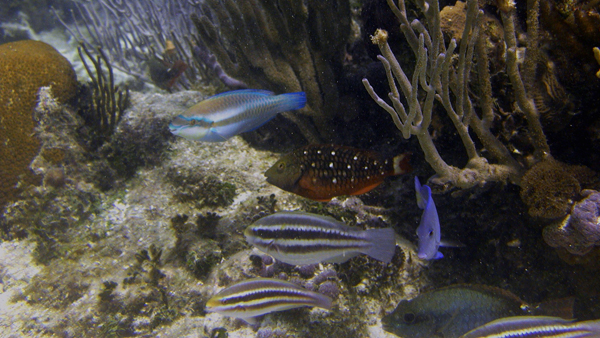 Species of parrotfish and a blue tang swim off the coast of Puerto Rico. Ecosystem-based fisheries management means considering the unique role that fish play in the marine environment.

An idea known as ecosystem-based fisheries management is gaining momentum. It's based on the principle of considering the whole rather than just the parts; so, instead of focusing on one fish population at a time, this idea takes a big-picture look at fish in the marine environment. In other words, before setting fishing rules, it may make sense to also consider where fish live, how their environment affects them, what they eat, what eats them, what unique roles they perform in the oceans, and what threats they face from a changing ocean.

That’s a tall order, so a task force has been created to work out how this concept can be put into practice.

Led by Timothy Essington, a professor in the School of Aquatic & Fishery Sciences at the University of Washington, the task force is comprised of leading fisheries scientists from across the country and was brought together by the Lenfest Ocean Program—a grantmaking organization that funds scientific research on the world’s oceans, in part with some funding from The Pew Charitable Trusts. An advisory panel of government scientists and fisheries managers will provide insight and suggestions to the task force.

The groups will meet over the next two years and develop a practical blueprint that managers can use to account for the relationships among marine life, humans, and the environment— in a holistic and integrated way. For more information visit http://www.lenfestocean.org/en/publications/fact-sheet/new-task-force-on-fisheries-and-ecosystems

Managing marine resources has always been challenging, but stepping back to consider the big picture holds promise for improved planning—and a more certain future for our valuable fish species.