On May 7, the Karajarri Traditional Owners and the Australian government created Karajarri country. A 2.4 million hectare area, the protected land extends from the dunes of the Great Sandy Desert, crossing into coastal shrublands and encompassing the newly-created Eighty Mile Beach section of the Great Kimberley Marine Park. It is home to many rare animal species such as the endangered bilby, rare turtles, and migratory birds. Once found in 70 percent of mainland Australia, the numbers of the endangered bilby have declined significantly since the early 1900s because of competition for food and degradation of its habitat.

The Kimberley, in the north west of Outback Australia, has seen a dramatic increase in protection during the past 12 months. Tradition Aboriginal owners have enthusiastically entered into new agreements to safeguard their lands. Four massive Indigenous Protected Areas, or IPAs, now exist side by side, creating the country’s largest continuous conservation corridor.

According to senior Karajarri Ranger Jessica Bangu, the declaration of the Indigenous Protected Area promotes the role of Aboriginal leadership and will ensure Traditional Owners are at the forefront of managing their country.

“Indigenous Protected Areas let us look after and protect our country, the way our old people want us too. It provides the right cultural match as having an IPA is not just about looking after the environment but making sure our people, our culture, and our heritage is strong as well,’’ she said.

“It makes us proud to have this IPA. It is recognition of the hard work we have done over the years to make this happen. Today’s declaration is the start of the next chapter in our journey as a community and we look forward to protecting our country to make sure it can be enjoyed by our future generations.” 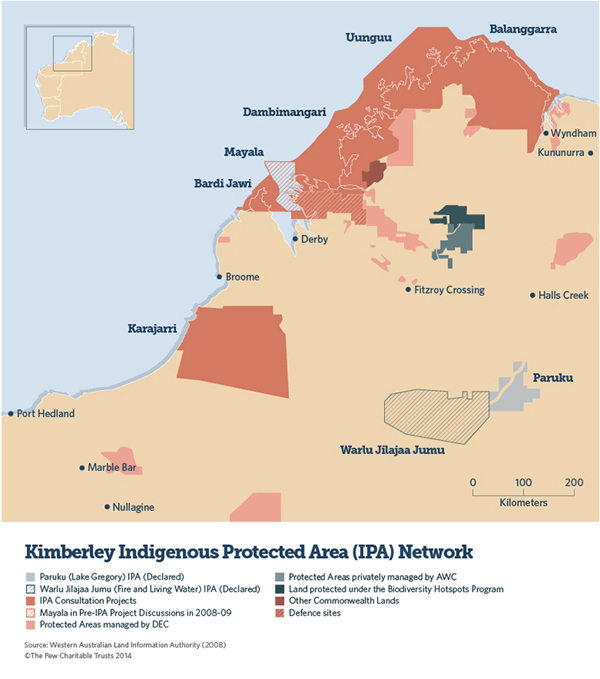 Conservation of the Kimberley

Indigenous conservation is flourishing in the Kimberley with about 20 percent of the vast region now protected as IPAs. Similar to national parks, these areas protect unique landscapes, plants, and animals and are managed by their Indigenous Owners with a combination of local traditional knowledge and contemporary science.

Western Australian Premier Colin Barnett described the creation of the Great Kimberley Marine Park and the adjacent Wanjina national park as one of his “signature achievements” and the “major environmental legacy” of his government.

“The establishment of the Karajarri Indigenous Protected Area is an important milestone toward securing the natural and cultural heritage of the Kimberley,” says Patrick O’Leary, Pew’s manager of conservation partnerships. “Indigenous Protected Areas like this provide a wealth of benefits, from safeguarding Australia’s unique landscapes to providing much-needed jobs for local Indigenous people.”