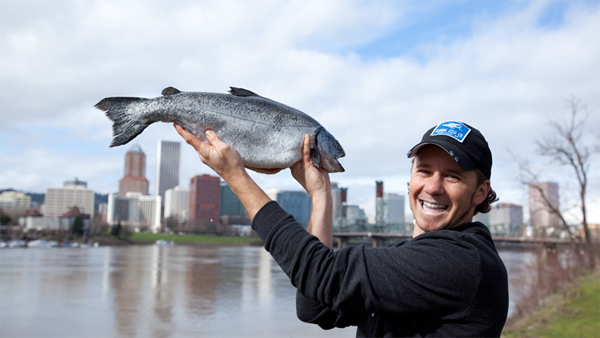 Lyf Gildersleeve is a small-scale seafood retailer in Portland, Oregon, with a big message about ocean conservation. Here, he holds a spring chinook salmon.

As a business owner specializing in sustainable fish, Lyf Gildersleeve depends on a productive ocean and a vibrant commercial fishing industry to deliver a year-round bounty of fresh, locally caught seafood. That's why he is active in encouraging West Coast fishery managers to conserve forage fish. He has testified that forage fish species—such as smelt, saury, and sand lance—may not be well-known to the general public, but they are part of an abundant and diverse prey base that’s a critical food source for salmon, lingcod, tuna, and other species of seafood that he sells to his customers.

Gildersleeve is the second-generation owner of Flying Fish Co. As a flying instructor, his father, Craig, routinely taught students navigating a loop between his home in Sandpoint, Idaho, and Seattle. He realized that he could make a little extra money and fulfill local interest in fresh seafood by stopping in Seattle and loading his Cessna with fish from Puget Sound.

Gildersleeve has carried on that enterprising spirit, with an ethic to protect the resource that, in turn, sustains his business.

Q: How did you become so interested and active in promoting conservation of ocean resources?

A: I would say that every season of the year brings a constant reminder of the health of the oceans. If crab is having problems, then I know about it because there is less crab on the market and the price is higher. Same goes for rockfish, lingcod, shrimp, oysters, tuna, et cetera. Availability and price are constant reminders of the health and sustainability of marine ecosystems. Fish size is also important. If we find that only small fish are coming to market, then perhaps we are overfishing the larger fish.

Q: How did you get into this business?

A: I had been selling real estate in Utah, when I was laid off with the crash six years ago. At that point, I got into the family business and began selling fish at a farmers market where I was living in the state. I saw the demand and made it happen.

Q: It seems like you’ve tapped into the locavore movement by promoting fresh, locally caught seafood. Why do you think that resonates in Portland?

A: It’s part of getting to know where your food is coming from. I’ve tried to educate customers about what happens in the seafood market. For example, albacore tuna are caught 40 miles off our coast, but in many cases they are sent to China for processing. Not only are we losing processing jobs in Oregon, but also the fossil fuels used to ship these fish to Asia are ridiculous. I buy directly from fishermen or from primary processors at the coast. I believe it’s important to bring sustainably caught, hand-harvested fish to the marketplace.

Q: You studied aquaculture in college and stated that farmed seafood will be needed to feed a growing world. Yet you’ve also promoted conservation of forage fish that are often caught to feed farmed fish. How do you square those views?

A: I don’t believe we need to take forage fish for aquaculture feed. We’re wasting millions of tons of filleted-out fish bones that could be converted into fishmeal or fish oil and could go to feeding farmed fish. I feel like we need to be smarter about where we source our aquaculture feed, rather than catching fish from the ocean that are alive and well and feeding other wild fish in the sea.