For millions of people collecting bottled water and batteries in anticipation of hurricane season, which starts June 1, it might come as good news that there's a natural way to lessen high waves, flooding, and erosion.

A new study shows that intact coral reefs can reduce wave height by 84 percent and wave energy by 97 percent. According to the study published this month in the journal Nature Communications, these benefits of healthy corals can translate into protection for some 200 million people worldwide living near coasts. Degraded reefs mean people will bear the cost of more storm destruction, the study warned.

The research, led in part by Pew marine fellows Michael Beck of The Nature Conservancy and Fiorenza Micheli of Stanford University's Hopkins Marine Station, helps bolster reasons for saving declining reefs, which are also important habitat for many fish species.

The authors say their results show that funding for reef restoration is a smart investment as a first line of defense against storms. 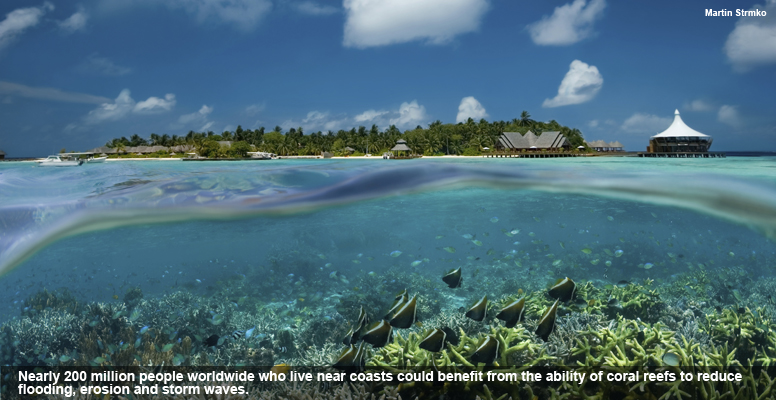 The study also found it was much less expensive to let nature do its job rather than building seawalls or other kinds of bulkheads or breakwaters that reduce the intensity of waves. Corals and the man-made structures perform about the same in providing relief from the full intensity of waves. Yet the authors surveyed 29 projects and found the median cost of breakwater construction was 15 times more than restoring reefs. 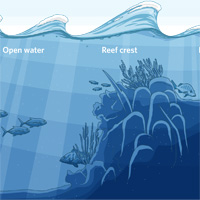 And consider maintenance. When a concrete breakwater starts to crumble, someone has to fix it and often at the considerable expense of scarce taxpayers dollars. A living coral reef, however, has the potential to repair and maintain itself.

The authors highlighted the top 15 countries where coral reefs may provide the greatest protection, based on the number of people living along coasts at low elevations and close to reefs. Indonesia, India, and the Philippines ranked tops. The U.S. ranked seventh on the list.

Coral reefs are valuable natural resources that contribute to healthy ecosystems. They are home to many fish that people like to catch and eat. Research demonstrates that corals can help safeguard the homes of people living near coasts. It makes sense— both for our oceans and ourselves—to protect reefs.

Holly Binns is director of Pew's U.S. Ocean conservation work in the Southeast and U.S. Caribbean.