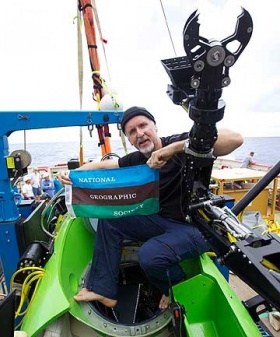 Hollywood movie director James Cameron is mourning the loss of  ''a friend'' after deep sea sub imploded 10km under the sea.

The Nereus, a robotic research vehicle was exploring the Kermedec Trench, which lies hundreds of kilometres north-east of New Zealand, when it was crushed by the immense pressures late last week.

The Titanic and Abyss director and ocean explorer descended to the deepest part of the ocean in 2012.

He then donated his robot sub Deepsea Challenger to Woods Hole Oceanographic Institution, which is overseeing the Kermadec dive.

Cameron said the destruction of Nereus is a ''tragic loss for science'' and a ''dark day for many reasons.'' Cameron is a friend of exploratory team head Andy Bowen and chief scientist Tim Shank.

''I feel like I've lost a friend,'' he said. ''Nereus was an amazing, groundbreaking robot and the only currently active vehicle in the world  that could reach the extreme depths of the ocean trenches.''

Cameron knows how attached scientists become to their robots, after losing a ''bot'' while exploring the Titanic wreck. ''I know what the Nereus team must be feeling...my heart goes out to them. They've not only lost a child, they've lost a great opportunity to explore one of the ocean's deep trenches - the last great frontier for exploration on our planet.''

Cameron is a member of the Oceans Elders collective, which backs the Pew Charitable Trusts, which are campaigning for the Kermadec region to be declared a vast marine reserve because of its value to science. Kermadec Initiative director Bronwen Golder today wrote to MPs, citing Cameron's words.

Scientists from around the world are conducting ''leading edge research'' in the trench, she wrote.

''While Nereus has been lost in the Kermadec Trench, new versions of Nereus are already being built. Here's hoping deep sea exploration will be up and running again soon - within a Kermadec Ocean Sanctuary.

The National Government has so far refused to back a marine reserve in the area, which is mineral-resource rich.

This article was originally published on stuff.co.nz (with video).