Once, when a fire struck, a community would form a bucket brigade to help. This spring, the community of Wakefield, Rhode Island, took the same approach to a different sort of threat: the decline of river herring.

Each year the volunteers gather at an old mill dam on the Saugatucket River that blocks the seasonal herring migration. They hand nets full of the fish from person to person until the herring can be returned to the water upstream of the dam to continue to their spawning areas.

A crew for the Public Broadcasting Service's series “This American Land” was there April 26, 2014, with staff members of The Pew Charitable Trusts and its partners in the Herring Alliance to document this remarkable example of citizen-led conservation.

Alewives and blueback herring, collectively known as river herring, were once abundant in the streams and coastal ecosystems of New England and the mid-Atlantic. But populations of these fish have been brought to historic lows because of damage affecting both parts of their life cycle, a deadly combination of dams in streams that block access to spawning grounds and overfishing at sea. 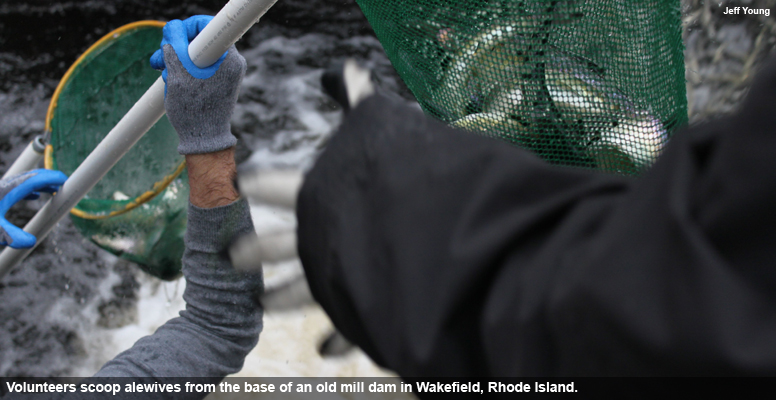 Volunteer efforts like this and taxpayer-supported dam removals along the coast are helping these fish while they are in our rivers. Despite their name, however, river herring spend most of their lives in the ocean. And scientists say harm occurring there continues to undermine the good work being done to improve conditions in streams. Too often, river herring are killed in giant nets as bycatch by fishing vessels targeting other ocean species.

A recent study—led by Eric Palkovacs, assistant professor of ecology and evolutionary biology at the University of California, Santa Cruz—concluded that a major emerging concern is bycatch in marine fisheries, which overlaps geographically with regions in which we found stocks to be declining most precipitously.” In a statement, Palkovacs said, “It's looking more and more like offshore bycatch could be playing a role in preventing the recovery of these populations.” 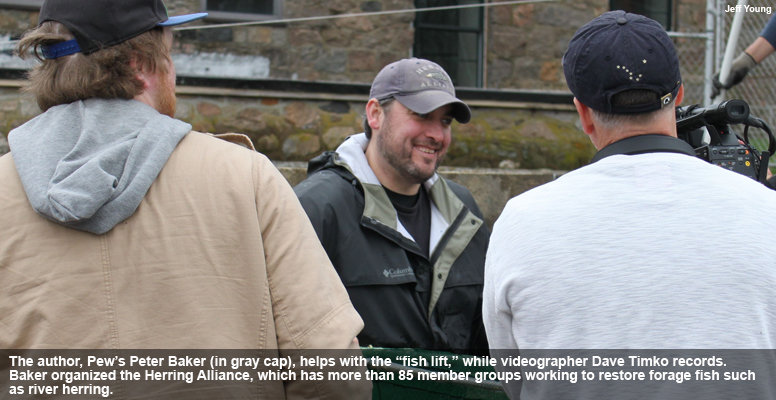 Despite these and other local efforts, no monitoring is done on most fishing trips of the large vessels responsible for much of the river herring bycatch. This must change.

The volunteer hours and taxpayer dollars invested by residents of Wakefield and other local communities are jeopardized when we let millions of these fish be needlessly killed by the industrial-scale trawlers targeting Atlantic herring and mackerel. 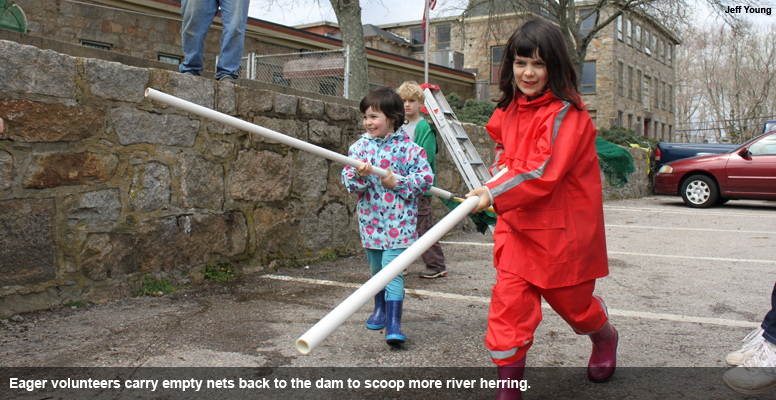 Pew and its partners in the Herring Alliance are working to improve oversight and accountability of these industrial fishing fleet operations. And we hope that the inspiring, community-led efforts captured in April by producers of “This American Land” will encourage policymakers to take action to help restore river herring stocks to healthy levels by creating strong regional protections for these fish at sea.

The syndicated PBS program “This American Land” will be shown in the coming months. Check here for a broadcast schedule.