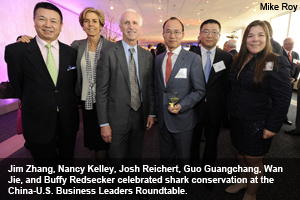 Four of China's most successful business executives have been recognized as “Global Shark Guardians” for their work securing a ban on shark fin soup at Chinese state banquets. On April 17, The Pew Charitable Trusts, The Nature Conservancy, and WildAid honored Guo Guangchang, Wan Jie, Ding Liguo, and Zhang “Jim” Xingsheng at the annual meeting of the China-U.S. Business Leaders Roundtable in New York.

Joshua S. Reichert, executive vice president of Pew's environmental programs, explained to members of the group how these entrepreneurs achieved this feat in the birthplace of shark fin soup. He was joined in bestowing the honors by Nancy Kelley of The Nature Conservancy and Buffy Redsecker, representing WildAid.

In 2009, as members of the China Entrepreneur Club, Ding, Guo, and Zhang pledged to stop eating shark fins and called on fellow business leaders to do the same. In March 2011, Ding submitted a proposal to the National People's Congress to support a ban on the trade in shark fins. Wan submitted the same proposal to the Chinese People's Political Consultative Conference. The measure did not become law, but the men were not deterred.

The next year, Ding and Guo proposed to the National People's Congress that consumption of shark fins be prohibited at government banquets. Wan submitted the same proposal to the Chinese People's Political Consultative Conference. Supported by more than 30 members of the National People's Congress, the State Council announced in July 2012 that it would seek to ban the consumption of shark fins at official events. The ban went into effect in December 2013. Hong Kong had instituted a similar prohibition three months earlier. 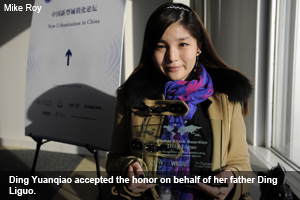 “The achievements of Mr. Guo, Mr. Ding, Mr. Wan, and Mr. Zhang mark a significant turning point for shark conservation,” said Imogen Zethoven, director of Pew's global shark conservation program. “Sharks are majestic, ancient animals that have evolved within their marine ecosystems for more than 400 million years. But within the past few decades, overfishing of sharks has damaged the environmental and economic health of our oceans. These business leaders are not just saving sharks; they are saving our oceans.”

It is estimated that 100 million sharks are killed each year, driven in large part by demand for shark fins, an extravagant, high-end menu item in many parts of the world. More recent developments, however, indicate growing momentum to protect sharks. On April 9, Starwood Hotels & Resorts Worldwide, which operates nine major hotel chains, announced that it would join a growing list of hospitality and transportation companies that no longer serve or ship shark fins.