Three hundred global leaders from government, business, philanthropy, academia, and nongovernmental organizations gathered in Half Moon Bay, CA, in late February to discuss how best to protect our global ocean and its resources.

Fishing pressures on the high seas—the areas of ocean beyond the 200-nautical-mile jurisdiction of coastal states—are increasing. These areas cover almost 45 percent of the Earth's surface, which means effective and coordinated global ocean governance has become more important. Participants at the second World Ocean Summit, convened by The Economist, engaged in compelling debate over what can and should be done to stop the degradation of these waters and ensure that marine life can thrive. 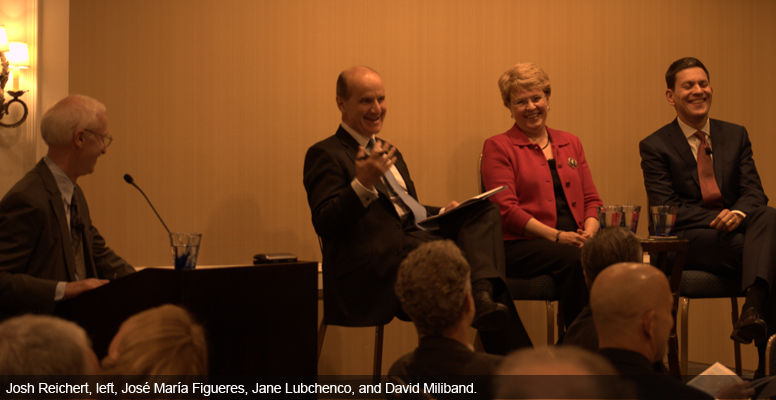 In addition to remarks by such luminaries as Secretary of State John Kerry, England's Prince Charles, and Monaco's Prince Albert II, the event showcased the ocean work of The Pew Charitable Trusts. The Feb. 24 to 25 program began with remarks from former Secretary of Defense Leon Panetta, who also served as chairman of the Pew Oceans Commission. Josh Reichert, Pew's executive vice president, took part in a panel on high seas governance in the 21st century.

Although Reichert said the international bodies responsible for governing our oceans “leave a lot to be desired,” he voiced optimism that agreements could be reached to better protect these important waters.

Reichert and Pew hosted a luncheon and panel discussion with members of the Global Ocean Commission. At the session, “A Conversation with Commissioners,” speakers discussed how best to achieve effective governance and sustainable management of the ocean. The panel members were Jane Lubchenco, a member of the Pew Oceans Commission and former administrator of the National Oceanic and Atmospheric Administration and the global commission's co-chairmen; José María Figueres, former president of Costa Rica; and David Miliband, president of the International Rescue Committee. Figueres and Miliband also spoke on a separate panel specifically about high seas governance.

The Global Ocean Commission's final report and recommendations will be released in late June. It is charged with finding politically and technically feasible proposals to reverse the degradation of the global seas ocean and restore sea life.