The House of Representatives voted Tuesday to pass the Sleeping Bear Dunes National Lakeshore Conservation and Recreation Act, sending the measure to President Barack Obama to be signed into law. The bill, which passed in the Senate in June, will protect more than 32,500 acres in Michigan, including pristine shoreline and forests on the coast of Lake Michigan. It will be the first new wilderness designated during the 113th Congress.

“Rep. Benishek and Sen. Levin have provided great bipartisan leadership, working with the community to develop a bill that will help ensure the long-term well-being of Michigan's treasured lakeshore and its central role in the region's economy,” said Mike Matz, director of the U.S. public lands initiative for The Pew Charitable Trusts. “Wilderness designation will ensure that the local community's interest in the natural, scenic, and recreational values of the lakeshore will be protected for generations to come.”

Upon introduction of the bill in 2011, Sen. Levin said, “The ancient sand dunes at Sleeping Bear Dunes National Lakeshore are truly one of nature's great masterworks.”

The lakeshore stretches along 35 miles of lake coastline northwest of Traverse City, MI. It includes land on Michigan's Lower Peninsula and two islands just offshore: North and South Manitou Islands, which will also be designated as wilderness. The lakeshore's miles of sand beach, towering bluffs, lush forests, clear inland lakes, and unique flora and fauna earned it the title of “Most Beautiful Place in America” in 2011 from ABC's “Good Morning America” program.

Congress officially recognized the area's wild qualities more than four decades ago. In 1970, after years of local debate about who could best manage the land, Congress established the Sleeping Bear Dunes National Lakeshore, a unit of the National Park Service, and protected the area from development, logging, and commercial interests.

Sleeping Bear Dunes is the first wilderness bill passed by both houses of Congress since the Omnibus Public Land Management Act of 2009. 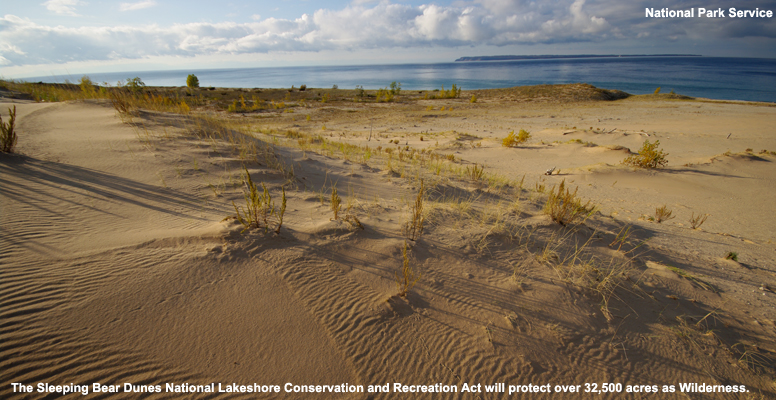