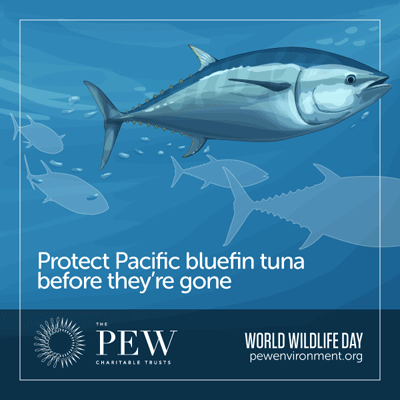 Pacific bluefin tuna are an impressive testament to the wondrous world just beneath the ocean's surface. In the catalogue of marine wildlife, these warm-blooded, highly migratory fish put up some extraordinary statistics.

Larger adult bluefin can weigh 455 kilograms (1,000 pounds) and measure more than 3 meters (10 feet) in length. Juveniles are quite small—2 to 4.5 kilograms (5 to 10 pounds)—but they swim from the Sea of Japan a whopping 9,600 kilometers (6,000 miles) to the waters off Baja California. There, they feed for two to four years before making the trek back to Asia to join the breeding population.

Today, their numbers are in dramatic decline, and governments have done little to protect them from sliding closer to extinction. However, unlike some marine animals that have been decimated by unsustainable fishing practices, Pacific bluefin could make a relatively quick comeback. They just need a bit of practical help.

Last year, an assessment by the International Scientific Committee for Tuna and Tuna-like Species in the North Pacific Ocean, an independent group of government scientists, found that the Pacific bluefin population is no better than 4 percent of its historical size—its numbers before the start of commercial fishing. For decades, fishermen caught so many, and caught them so fast, that the stock never had an opportunity to recover. With 96 percent of the population gone, nearly all of the Pacific bluefin caught today are small fish, juveniles that haven't had a chance to grow to full size or value, let alone to reproduce.

A sophisticated trade network of fishermen, businesses, and markets exists solely to profit off of Pacific bluefin tuna, a trade worth millions. Consider that a single 230-kilogram (507-pound) tuna sold in Tokyo this year for roughly $70,000 (7.36 million yen). That kind of price has largely been considered a spectacle to generate headlines and prestige, but make no mistake: The Japanese market is willing to pay a high price for the deep red meat of Pacific bluefin, with single fish going for tens of thousands of dollars apiece.

Fishing nations are responsible for collectively managing tuna stocks through regional bodies. In the case of Pacific bluefin, the Western and Central Pacific Fisheries Commission, or WCPFC, and Inter-American Tropical Tuna Commission, or IATTC, are charged with this duty in the western and eastern Pacific Ocean, respectively. Still, through years of overfishing they have let the population plummet to less than 4 percent of its historic size. Last year, when scientists called for limiting catches and allowing the population time to rebuild, member states from both commissions failed to take any decisive action. Overfishing continues today.

As Pacific bluefin tuna continue to suffer from a lack of sound management, the opportunity is ripe for governments to take meaningful, science-based action that produces results. Much like businesses have to budget finances, fisheries must budget resources. If the ultimate goal is to generate as much profit as possible from catching fish while allowing the population to rebuild, the pathway forward is quite simple—put a catch limit in place so fewer fish are caught and stick to a size requirement.

The first step toward reversing declines is ensuring that fishermen reduce their catches. There's no getting around it. A science-based catch limit will mean a short-term loss, but one that guarantees long-term gains. And the cost of inaction is a future without these fish. The next step is for fishing nations to agree on a minimum size for all Pacific bluefin caught. This is vital. A recent study presented to Pacific fishing nations found that requiring a minimum size for all Pacific bluefin catches would allow the population to recover rapidly. It also would allow fishermen to sustainably increase their catches in just a few short years.

This World Wildlife Day, The Pew Charitable Trusts is putting the spotlight on Pacific bluefin tuna. After decades of mismanagement and overfishing, this species is a success story waiting to happen.

Read the stories below to learn more about Pew's global work to conserve the wildlife we all cherish: