While snow fell along the East Coast, the sun shone brightly in Tucson, AZ, for the Feb. 13, 2014, ribbon cutting of the Department of Defense's largest solar array at Davis-Monthan Air Force Base.

The 16.4-megawatt solar farm will deliver 35 percent of the base's electricity needs and is expected to reduce energy costs by $500,000 annually. In 2010, Davis-Monthan signed a 25-year power purchase agreement with SunEdison to design, finance, build, operate, and maintain the array on 170 acres of underutilized land.

"When you look at the money saved over 25 years, it's incredible and also critical to our mission, not only to Davis-Monthan, but also to the DOD," said Col. Kevin E. Blanchard, 355th Fighter Wing commander. "We are looking across the DOD right now for every avenue that we can find to save money and put that money into readiness and sustainment of our force. By saving money on [the base's] electric bill, that will help the future of our air force."

Public-private partnerships were essential to financing construction of the array, allowing the air force base to acquire solar power, along with the associated energy security benefits, at little or no upfront cost. Recent research by The Pew Charitable Trusts found that an estimated 80 percent of future Defense Department renewable energy projects will be executed through power purchase agreements, such as the one at Davis-Monthan, that rely on private developers to finance, build, and maintain projects while saving military bases money over the life of the contract.

“We are thrilled to do our part in helping the Air Force work towards its goal of developing 1 gigawatt of renewable power by 2025,” said Scott Provinse, SunEdison's director of government programs. “It requires true partnership in every sense of the word, and I think Col. Blanchard hit the nail on its head when he said, ‘This project is the result of a symbiotic relationship between private and public organization.'  By coming together and combining our expertise, we've successfully completed a project that many initially doubted was possible.”

David Hutchens, president of Tucson Electric Power, re-enforced Blanchard's sentiment, saying: "When SunEdison first proposed building this system at Davis-Monthan AFB, a project of that size was unheard of. We knew it was ambitious but also visionary.  Through diligence and expertise, they made the system work for all parties. This is a very successful example of the possibilities of public/private partnerships."

He added, "This project will produce enough energy annually to power over 3,000 homes; it will reduce carbon emissions equivalent to taking 7,500 cars off the road; and it will save 20 million gallons of water. That's a great effect for our environment, and that's right here in our Tucson community."

The U.S. Air Force spends more than $9 billion annually on electricity and fuel costs, making it the largest consumer of energy in the federal government. To meet its goal of acquiring 25 percent of its electricity from renewable sources by 2025, the Air Force is working to reduce energy consumption through energy efficiency initiatives and increased renewable power generation, such as solar. 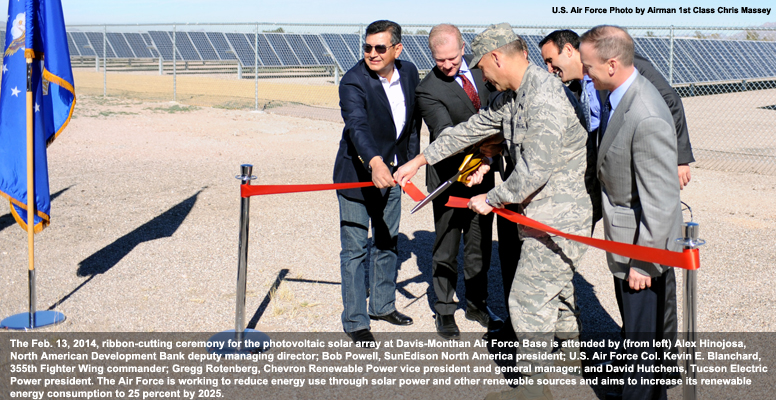