Antarctica and the Southern Ocean that surrounds it are considered to be among the last pristine places in the world. But new research shows that some of the continent's birds and fish are being contaminated by a pollutant normally found in metropolitan rivers.

In research first reported by Environmental Health News (PDF), Da Chen, an ecotoxicologist at Southern Illinois University, and colleagues reveal high levels of the flame retardant hexabromocyclododecane, or HBCD, in parts of Antarctica's McMurdo Sound. This area is home to research stations established by the U.S. and New Zealand. Thousands of scientists are there during the research season, and many more tourists visit each year. Wastewater from the research facilities that is contaminated with flame retardants and other persistent organic pollutants has infiltrated the sediment near the sound.

The polluted area is a gateway to the Ross Sea, which covers 3.6 million square kilometers (1.9 million square miles) of ocean and is considered “the least altered marine ecosystem on Earth” by the journal Biological Conservation. According to Chen, though, HBCD levels in the sound's sediment are comparable in some places to those found in highly polluted rivers near densely populated areas, such as Michigan's Detroit River. This contamination has the potential to disrupt animals' thyroid hormones, which can affect brain development and weight. HBCD has been found in the smallest of sea sponges as well as Adélie penguins, potentially affecting the health of other animals throughout the region's food web. 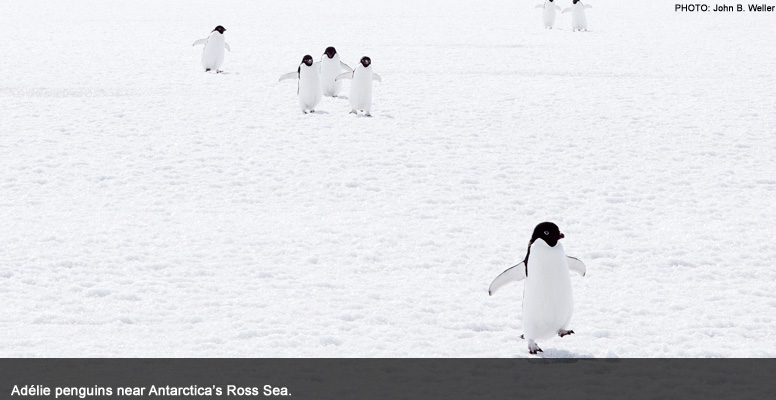 Previous research has found other flame retardants—now-banned brominated compounds—in fish and wildlife near McMurdo Station's wastewater outflow. While these problems would have to be addressed locally, flame retardants are not the only contaminant of concern in Antarctic waters.

The Environmental Defense Fund and Natural Resources Defense Council have reported elevated mercury levels in Antarctic toothfish, more popularly known as Chilean sea bass, which could present a risk to consumers. Discharged by power plants, mercury is transferred globally through air and wind currents and tends to migrate and concentrate near the poles.

Creation of a network of large-scale, fully protected marine reserves in the Southern Ocean could help mitigate pollution problems. Marine reserves promote ecosystem resilience and offer animals such as toothfish and penguins a refuge from intensive fishing efforts and other pressures that may throw the food web out of balance.

"It is surprising that the remote Ross Sea and the animals that depend on it are contaminated with industrial pollutants normally associated with urban environments," said Andrea Kavanagh, director of The Pew Charitable Trusts' Global Penguin Conservation program and a Southern Ocean expert. "Marine reserves are not a direct fix for the pollution problem but they do help mitigate some effects and give animals some protection from other pressures.  The most effective way to ensure a healthy future is through the creation of large-scale, fully protected marine reserves."