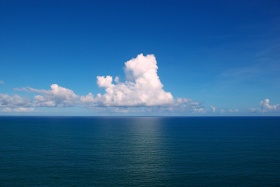 OPINION: If there is one thing rich guys love, it's yachts.

So, it's little wonder that some of the world's wealthiest philanthropists, each with their own special connection to New Zealand, are parting with pots of money to save our seas.

Former New York Mayor Michael Bloomberg just coughed up $64 million to transform the way the world fishes. His donation will concentrate efforts on saving threatened species in Brazil, Chile and the Philippines.

James Cameron's interest in the deep didn't stop with Titanic. The movie director, and sometime resident of New Zealand, has journeyed to the ocean's deepest point, seven miles below the surface.

His journey to the Abyss wasn't a stunt: the one-man submarine captured 3D footage of previously undiscovered creatures in the dark underworld. He donated the vehicle to science and last year testified before a US Senate sub committee, urging the US government to fund more oceanic research as a means to understanding climate change.

His views on marine conservation have been made plain to the New Zealand government: papers released last year show he wants waters around the Kermadec Islands conserved. He is believed to have lobbied Prime Minister John Key on the matter.

Hedge fund billionaire Julian Robertson has long supported marine conservation through his Robertson Foundation. In a 2011 letter, he urged Key to show "bold" leadership on the 620,000sq km Kermadecs sanctuary.

Other, powerful, figures have become standard bearers for the cause. On the other side of the Pacific, US Secretary of State John Kerry calls himself a "child of the ocean" and emphatically backed New Zealand's unsuccessful attempts to create an Antarctic Ross Sea sanctuary. There is speculation that Sebastian Pinera, Chile's ultra-wealthy president, will soon announce a marine reserve in the waters around Easter Island.

And where does New Zealand stand in this global effort to protect the oceans?

Earlier this month Conservation Minister Nick Smith was loudly trumpeting the Government's ambitions. He said he wanted to create a record number of reserves, with eight to follow this (election) year.

Voters certainly have faith in the progress. A study recently published in Marine Policy journal showed that the public believe 30 per cent of the country's marine environment was protected by no-take reserves. Sadly, they've been fooled. By a hundred-fold. In reality only 0.3 per cent is covered by no-take areas.

As he kayaked around the Horoirangi Marine Reserve to launch two reports, Smith declared: "The marine environment is the new frontier for conservation." Interesting, because of the eight reserves he mentioned, planning began prior to National taking office.

Decisions on the three sub-Antarctic sanctuaries were taken in December 2010 and a bill introduced in July 2011. The Akaroa harbour reserve was first proposed in 1996 - and was finally approved last year.

Late last year, Smith announced a community-led forum to develop a marine protected area along the Otago coast. Laudable, but any concrete plans are at least two years away.

This year's election campaign will focus on the growing gap between rich and poor. But on ocean conservation vs energy development, many of the haves and have nots are united.

This article was originally published on stuff.co.nz