The end of the year saw a flurry of legislative activity in Washington, along with a few actual snow flurries, as both the House and Senate took action on wilderness—making many conservationists' holidays just a little bit happier. 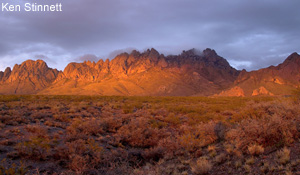 Pew has been working for more than seven years with a diverse local coalition to protect these unique wildlands.

Also in early December, Senator Mark Udall (D-CO)—cousin of New Mexico Sen. Tom Udall—unveiled a holiday surprise with the introduction of legislation to protect some special public lands in Colorado. The Browns Canyon National Monument and Wilderness Act is based on a community-driven proposal that would establish a 22,000-acre Browns Canyon National Monument and include approximately 10,500 acres of newly designated wilderness.

The area, which includes portions of the Arkansas River, is popular among hikers, rafters, and others who appreciate the natural beauty and solitude of the canyons and unique rock formations. Hunting and fishing are also popular in the region. Working closely with his constituents, Sen. Udall based the legislation on a draft bill he released in March. The new measure will ensure that traditional grazing can continue in the area, while also banning mining development along the riverbanks.

A third eagerly anticipated bill was introduced in the Senate on Dec. 9. The Oregon and California Land Grant Act (S. 1784), sponsored by Senator Ron Wyden, (D-WA), addresses management of the so-called Oregon & California Lands (O&C lands) in western Oregon. These are federal lands overseen by the Bureau of Land Management. The legislation would amend portions of the O&C Act of 1937 to remove mandatory logging requirements, revise the county revenue-sharing formula, and protect key conservation areas within the O&C landscape. The bill would protect more than 1 million acres of these public lands under various conservation designations, including wilderness, wild and scenic rivers, and national recreation areas. The measure also would, for the first time, mandate the protection of old-growth forests, putting aside for future generations hundreds of thousands of acres of ancient forests in the Pacific Northwest. At the same time, the bill would increase the timber harvest, which would provide much-needed jobs for local communities. The legislation is not without some controversy, and Pew intends to continue working closely with Sen. Wyden and local stakeholders to ensure this measure has strong conservation protections while also addressing the economic needs of the region.

The Senate just kept on giving through December. Shortly before adjourning for the year, the Energy and Natural Resources Committee amended and marked up S. 37, the Forest Jobs and Recreation Act. Senator Jon Tester's bill would protect 637,000 acres of wilderness across the Beaverhead-Deerlodge, Lolo, and Kootenai national forests in Montana. The committee approved an amendment to the bill reflecting agreement between ranchers and conservation groups to set aside 20,000 acres of proposed wilderness in the Snowcrest Mountains as a special management area. The legislation would improve overall forest health and fish and wildlife habitat, as well as permanently protect areas for hunting, fishing, hiking, and horseback riding. Along with wilderness protection, the measure would designate some areas for backcountry recreation and others for forest stewardship. The measure goes next to the full Senate.

Finally, the House of Representatives also had good tidings for Americans before its adjournment. During the last week of the House's 2013 session, we received notice that at least two pending wilderness bills will be considered by the Natural Resources Committee early in the new year. At a Dec. 12 hearing on the Endangered Species Act, Chairman Doc Hastings (R-WA) announced his intention to complete consideration of the Sleeping Bear Dunes National Lakeshore Conservation and Recreation Act (H.R. 163), sponsored by Representative Dan Benishek (R-MI), and the Pine Forest Range Wilderness Act (H.R. 433), sponsored by Representative Mark Amodei (R-NV).

Rep. Benishek's bill would designate as wilderness more than 32,500 acres within the national lakeshore. This area on the mainland shore of Lake Michigan is popular with hunters, anglers, hikers, and boaters. Rep. Amodei's measure would designate 25,000 acres in northwestern Nevada as wilderness. The Pine Forest Range is a popular destination for sportsmen and recreationists.

All in all, some very welcome wilderness news as we begin the new year.