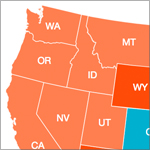 Only 14 states’ tax revenue had recovered from the Great Recession by the first quarter of 2013, after adjusting for inflation. Total state tax collections were still 1.6 percent below their peak in the third quarter of 2008. The difference shows how far states still have to go to regain lost tax revenue.

Despite more than three years of growth, state tax revenue has yet to fully recover from its plunge in the Great Recession. For every $1 states collected at their 2008 revenue peak, they took in the equivalent of 98.4 cents in the first quarter of 2013, after adjusting for inflation and seasonal fluctuations.

The difference between the latest quarterly tax revenue and each state’s peak quarterly level—based on four-quarter moving averages—is a gauge of the financial stress still burdening state budgets. It means most states had less purchasing power from their tax dollars while simultaneously coping with a sharp drop in federal stimulus aid, still-high unemployment, and rising demand for costly services such as Medicaid and education.

But it matters where you live. As of the first quarter of 2013:

Without adjusting for inflation, quarterly state tax revenue was 5.1 percent above peak overall and had recovered in 33 states, as of the first quarter of 2013.

Increasing tax revenue does not necessarily signal an economic comeback. Growth can come from tax increases or other policy changes. In the most recent quarter, for example, some increases likely were due to taxpayers accelerating capital gains to avoid a federal tax hike. Even getting back to peak only means that states have their previous purchasing power—with nothing additional to pay for costs associated with population increases, growth in Medicaid enrollment, deferred needs, or accumulated debts.

Chart Sources: Pew analysis of the U.S. Census Bureau’s Quarterly Summary of State and Local Taxes, as adjusted by the Nelson A. Rockefeller Institute of Government.