From the Chesapeake Bay to Florida's Gulf Coast, recreational fishing is big business for many communities along the Eastern Seaboard. In fact, more than one-third of America's 11.8 million saltwater anglers live in the region. I count myself among them. 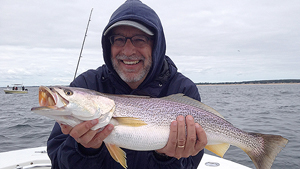 Lee Crockett poses with a beautiful, fat weakfish caught off Montauk, N.Y. It had been gorging itself on sand eels, a type of forage fish.

This national pastime is much more than throwing a line off a local pier. In some areas, anglers catch more of certain species of fish than commercial fishermen do. Unfortunately, a series of myths about recreational fishing has clouded recent policy discussion on Capitol Hill. Here are five of those myths.

1. There are plenty of fish in the water.

At first glance, it seems like common sense: If people are catching lots of fish, there must be plenty in the sea. But like all anecdotal evidence, on-the-water observations need to be backed up by more rigorous scientific research.
Anglers go where the fish are, and although discrete regions may have abundant supplies, the total area that a species occupies may have shrunk. For example, some fish form dense groupings when they reproduce, known as spawning aggregations, making them seem more prolific than they are, and also making them easy targets.

This is the case for barred sand bass and kelp bass, two popular recreational species in Southern California. Researchers discovered in a 2011 study that the populations of these fish had declined by 90 percent since 1980 and have now collapsed. Their tendency to cluster while spawning created an illusion of plenty, which kept anglers coming back for more. They did not realize that they were pushing the total population to unsustainably low levels.

2. Recreational fishing does not have a significant ecological impact.

In 2011, U.S. saltwater anglers made roughly 70 million fishing trips, according to an economic report from the National Oceanic and Atmospheric Administration, or NOAA. With the aid of technology, these fishermen catch more fish than ever, even surpassing commercial catch levels for certain species in some regions.

These two factors—the number of fishing trips and the number of fish caught on each trip—significantly influence the health of our ocean fish populations, because millions of individual anglers, catching even a few fish per trip, can have a huge overall ecological impact.

In the Gulf of Mexico, the number of anglers has increased 64 percent and the number of fishing trips has risen 42 percent from 1989 to 2009. Without effective management, this sharp increase could hamper efforts to rebuild depleted species such as the popular gag grouper and red snapper.

It seems logical that when managing a living natural resource—whether on land or in the ocean—we must set a cap on what we can extract if we want to keep hunting or fishing. Anglers collectively can have a major impact on the species they target, and we should do what we can to ensure sustainable fishing. This includes supporting the catch limit requirements of our key federal law, the Magnuson-Stevens Fishery Conservation and Management Act.

Some people see these limits as yet another example of government interference in their lives. And as the caps have taken effect, rumors have spread that many U.S. fisheries will be closed. In response, some are calling on Washington to weaken the Magnuson-Stevens Act so that certain recreational fisheries will be exempt from such curbs.

For a few species that are in the early years of rebuilding plans, catch will be limited. But that situation will improve over time, and meanwhile there are many other fish in the sea that anglers can target. The new catch limits system established by the Magnuson-Stevens Act is both reasonable and prudent—ensuring that decisions on how much we take from our seas are based on the best available research, not politics.

Those seeking to avoid responsible management of our natural resources often attack the science underpinning the conservation measures. Some members of the sport fishing community also take this approach.

The reality is that we have some data for every federally managed fish species. This information comes from comprehensive at-sea government surveys, historical catch levels, basic fish biology, and local knowledge. Fisheries managers are using this information to set catch limits at levels that will keep those populations sustainable.

NOAA's regional science centers are among the best in the world. The Alaska Fisheries Science Center in Seattle and the Northeast Fisheries Science Center in Woods Hole, MA, are global leaders. In recent years, NOAA also has invested heavily in its research center in the Southeast to meet the unique challenges that regional fisheries managers face there. These groups are all top-notch, bringing in some of the best scientists and embracing a well-developed system for peer review of their work.

Rather than trying to undermine the science, anglers should urge Congress to fund, expand, and improve research efforts, particularly with regard to recreationally important fisheries.

Few myths about the management of our nation's ocean resources are as pernicious as the allegation that the environmental community wants to “end fishing as we know it.” This claim is simply untrue.

Many conservation advocates are anglers, too. We enjoy being on the water and work with other outdoor enthusiasts to make sure that fish populations are healthy for the benefit of all Americans, even if they never cast a line.

The bottom line is that fishermen and conservationists truly have a common goal: We want to take care of the ocean so that future generations can keep fishing, diving, eating local seafood, and enjoying the myriad other benefits that our marine resources provide.

Rather than weakening current laws, let's instead work together to find creative ways to further improve the management of our oceans.

A generation of determined, farsighted commercial and recreational fishermen, marine scientists, and legislators have shaped the Magnuson-Stevens Fishery Conservation and Management Act, the law that governs American fisheries.