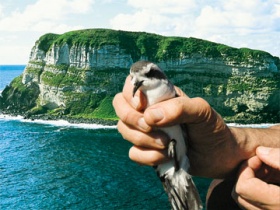 Weka, tern or storm petrel? Which of the 35 entries will win Bird of the Year? By Rebecca Priestley

One night on Macauley Island, in the Kermadec Islands group, in 1988, ornithologists Alan Tennyson and Graeme Taylor noticed something flitting around the Tilley lamp inside their tent. A close inspection of the tiny grey and white bird revealed a Kermadec storm petrel, a species known from only a handful of specimens shot at sea in the 1920s. The bird wasn’t nesting on Macauley, whose seabird population had been devastated by rats, cats and goats, but over subsequent years the birds were occasionally spotted at sea. In 2006, a Navy helicopter dropped Karen Baird and Mike Imber on Haszard Island – a rocky islet next to Macauley – to search for signs of the bird.

“The area on top of the island is quite small and the ground is soft,” says Baird. “Mike stuck his hand down a burrow and out came a Kermadec storm petrel on an egg. We looked at the amount of habitat available and estimated there were 100 burrows at most, so maybe 100 breeding pairs.”

Haszard Island is a grass-topped lump of volcanic rock sticking sharply out of New Zealand’s northern ocean. The many species of seabirds that live in the Kermadec Islands can survive patrolling sharks, erupting volcanoes and tropical storms, but the rats, mice and cats introduced in the 19th century decimated many species. Haszard Island, though, has remained pest-free, providing a haven for this vulnerable seabird who spends months each year raising a single chick in an earthy burrow.

The Kermadec storm petrel (Pelagodroma albiclunis) is one of the entrants in Forest & Bird’s annual Bird of the Year competition. Bronwen Golder, of the Pew Environment Group’s Kermadec Initiative, is campaign manager for this enigmatic little bird. “The Kermadec storm petrel is one of New Zealand’s endemic species – they’re found nowhere else in the world – but they are critically endangered,” she says. “But it’s a bird we know hardly anything about. How can one of our endemic birds be a total enigma? We want people to know about it, we want people to champion it; ultimately, we want to support scientists to study them and find out more about where they go, and when we find out that, we find out more about our ocean and how it’s working.”

Herrick – naturally – is picking the albatross will win, “or the weka, because it’s got a fiercely creative team behind it and it’s crafty and cerebral. I also think the kaka has a shot at the top spot, because it’s making a return to suburbia with the help of sanctuaries like Zealandia.”

Fine, but an albatross against a Kermadec storm petrel? That’s hardly a fair fight. I’m backing the underdog, the enigmatic, critically endangered storm petrel. Thanks to the island eradication expertise of the Department of Conservation, the cats and rats are gone from the Kermadecs now, so perhaps there’s a chance for the storm petrel to spread its wings and find new breeding spots.

PAST BIRD OF THE YEAR WINNERS

Cast your vote for Bird of the Year at birdoftheyear.org.nz between September 30 and October 29. 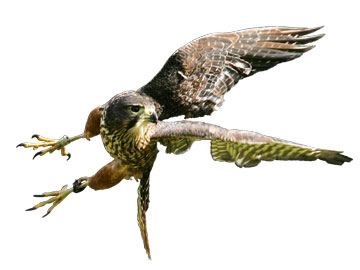 The karearea or New Zealand falcon.

This article was originally published in the Listener.