A preliminary report issued by the Overseas Vote Foundation analyzes the transmission of blank electronic ballots to military and overseas voters during the 2012 election. Following implementation of the Military and Overseas Voter Empowerment Act, all 50 states and the District of Columbia used email or Internet downloads to provide ballots to these voters. 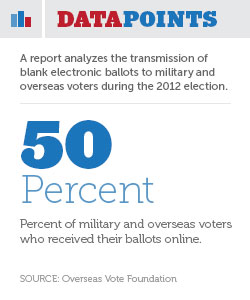 The foundation determined that more than 50 percent of survey respondents received their ballots online. Maryland, Minnesota, North Dakota, and Vermont had the highest rates of electronic ballot downloads among these voters.

The research also revealed a lack of data collection in some states. Twenty-four states were unable to specify the number of paper versus electronic ballots sent to military and overseas voters during the 2012 election, and only 16 states could provide return rates for electronically transmitted ballots.