Late summer in Washington was a quiet time, as most members of Congress left town for the August District Work Period and much of the rest of the city sought respite from the heat and humidity by going on vacation. Although Congress was not in session, however, everything did not grind to a standstill, and, just before leaving for the recess, the House Natural Resources Committee took action that would have dramatically adverse effects on our national forests.

The Restoring Healthy Forests for Healthy Communities Act (HR 1526), authored by the committee's chairman, Representative Doc Hastings (R-WA), was approved July 31. While Chairman Hastings describes the bill as a solution to resolving the crucial issue of funding for rural schools, the legislation would significantly undermine long-standing legal and administrative protections for our nation's forests and limit the ability of the Forest Service to meet its statutory obligations to manage its lands in a sustainable manner and under the principle of multiple use.

The legislation requires the designation of “forest revenue areas” in every national forest, which would be a legally enforceable obligation on the federal government to produce a mandated amount of commercial timber. This “annual volume requirement” would override multiple-use management under the National Forest Management Act and a series of similar laws that for decades have been the backbone of Forest Service management. The legislation also represents a fundamental break with the agency's ability to be flexible in its management approach in order to adapt to changes dictated by science, market forces, and public opinion. As a result, agency officials would be required to produce this “annual volume requirement” regardless of their own professional judgment and even when the amount of timber mandated was ultimately shown to be unsustainable.

As reported, the bill would affect most national forest lands, including national recreation areas, wild and scenic river corridors, lands protected by the Roadless Area Conservation Rule, and, potentially, lands that could be considered for wilderness protection. The legislation also would severely curtail the Endangered Species Act and the National Environmental Policy Act, as well as administrative and judicial review—the ecological consequences of which would be far-reaching.

The bill also includes a separate title that would reshape the Oregon and California, or O&C, lands of western Oregon, a change that is opposed by many conservation groups. The legislation—sponsored by Oregon Representatives Peter DeFazio (D), Greg Walden (R), and Kurt Schrader (D)—would convert more than half the O&C lands into a special management system governed under Oregon law, rather than federal law. As such, the legislation would jeopardize the environmental protections for endangered species and old growth forests currently provided for under the Northwest Forest Plan. While HR 1526 would designate a new wilderness area (Devil's Staircase) and expand another (Wild Rogue), as well as designate several new wild and scenic rivers, it is unacceptable in its current form. 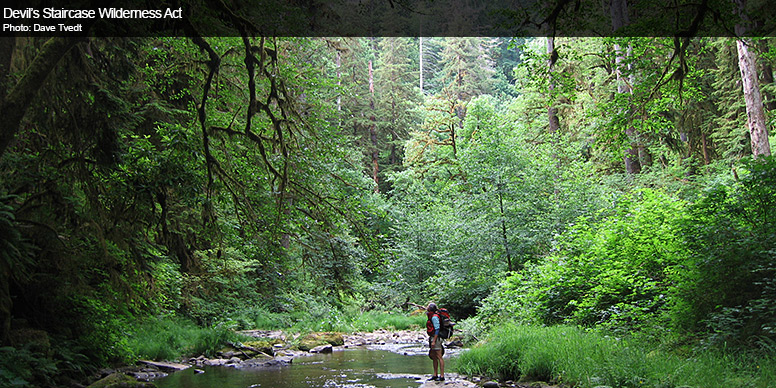 Pew is working to significantly amend the legislation as currently drafted and, barring that, will seek to defeat the bill.

Outside Washington, work continues on a number of efforts to address the management of various public lands.

In Utah, Representatives Rob Bishop (R-UT) and Jason Chaffetz (R-UT) are talking to constituents about the process they have initiated to address the best practices for managing Utah's public lands. In town hall meetings and on county field tours across their districts, the lawmakers have spoken to residents, as well as diverse stakeholders who are interested in ending the gridlock that many feel has prevented the proper designation and management of millions of acres of public lands in the state. Included in those meetings have been local and state elected officials, recreation groups, conservation groups, oil and gas officials, and Utah's School and Institutional Trust Lands Administration. Pew is engaged as a partner in this process and will continue to advocate for the preservation of special places in Utah.

Finally, Senator Patty Murray (D-WA) joined environmental and community leaders in the town of Index for a hike to celebrate the five-year anniversary of the designation of the Wild Sky Wilderness—an area Pew worked hard to protect. Just 40 miles east of downtown Seattle, the pristine rivers and rugged peaks of Wild Sky provide a true wilderness experience for visitors of all ages and abilities.

After the hike, Sen. Murray hosted a luncheon at the new Environmental Education Center in Index. The center was made possible, in part, by the economic activity and interest in the area as a result of its wilderness designation.

In the meantime, back in our nation's capital, we are preparing for a very active congressional session this month—developing new wilderness legislation, working for the consideration of existing wilderness bills, and actively defending against measures that undermine protections for our nation's public lands.