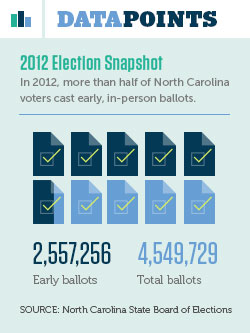 More than half of North Carolina voters cast early, in-person ballots in 2012. During the state’s early voting period, which ran for 17 days, voters were also able to register and cast their ballots at the same time. More than 98,000 people in the state took advantage of this same-day registration option for the 2012 general election. A new state law will shorten the early voting period to 10 days and end the practice of same-day registration beginning in 2014.