It's hard to envision an animal more tightly entwined in Pacific coast history, economics, and culture than the salmon coursing through the Columbia River basin.

Each year, millions of ocean-bound juvenile salmon migrate through mountain streams, over dams, and past cities and farms. As they pour out of a basin covering an area roughly the size of France, their survival depends to a large degree on the small schooling fish—commonly called forage fish—that congregate where the river meets the sea. Forage fish such as sardines and smelts eat tiny plants and animals drifting near the ocean's surface. These fish then become food for seals, seabirds, and bigger fish such as salmon. And after the salmon leave the river, they depend on forage fish as a critical food source for the bulk of their life cycle in the ocean.

Many species of forage fish — such as saury, sand lance, and various kinds of smelts — are fished extensively elsewhere in the world and are used in a variety of high-volume products, such as feed for livestock and farmed fish. In September, the Pacific Fishery Management Council, or PFMC, will convene in Boise, ID, to consider whether to apply basic management protection to forage fish species that are not yet being fished commercially on the West Coast. The objective in protecting them is to make sure that policymakers have a chance to analyze the potential impact on marine ecosystems to determine whether industrial-scale fishing can begin.

“Since the council last met in Boise a year ago, it has taken several interim steps to recognize the crucial ecological role of forage fish in the ocean, including adopting a fishery ecosystem plan that makes protection of forage fish its top priority,” says Paul Shively, who manages Pacific fish conservation efforts for The Pew Charitable Trusts. “Now the council has an opportunity to vote to start bringing important forage fish species under management, and prohibit fishing for them, until it can evaluate the effect on important predators such as Columbia and Snake River salmon and steelhead.”

For all the money and effort expended to restore their freshwater habitats, salmon and steelhead spend the majority of their lives in the ocean. There, the sustenance provided by oil-rich forage fish enables them to grow larger, produce stronger eggs, and improve their reproductive success. But global demand for forage fish is on the rise, largely for use as feed for farmed fish and livestock, according to a 2012 article in the Idaho Statesman, which also says that forage fish are far more valuable as a food supply for Idaho's struggling salmon.

Members of the Northwest Power and Conservation Council, or NPCC, wrote a letter in November 2012 stating that electric ratepayers spend $250 million a year to offset the damage to salmon habitat caused by federal hydroelectric dams. The council is a four-state regional organization that works to balance the Northwest's environment and energy needs by developing and maintaining a regional power plan and a fish and wildlife program. In its letter to the fishery management council, the NPCC cited its independent scientific analysis finding that the Columbia's estuary and plume are “exceptionally important” in determining the proportion of juvenile salmon and steelhead trout that will return to the basin as spawning adults, largely because of the presence of forage fish.

As the juvenile salmon head for the ocean, hundreds of millions of forage fish at the mouth of the river provide cover for the salmon smolts from a gantlet of predatory seals, seabirds, and bigger fish such as hake. Later, as they mature, salmon depend on forage fish as a primary food source.

The council doesn't control all of the factors affecting the survival of salmon, but it can take an important step forward in conserving their food supply in the ocean. Now is the time to act. 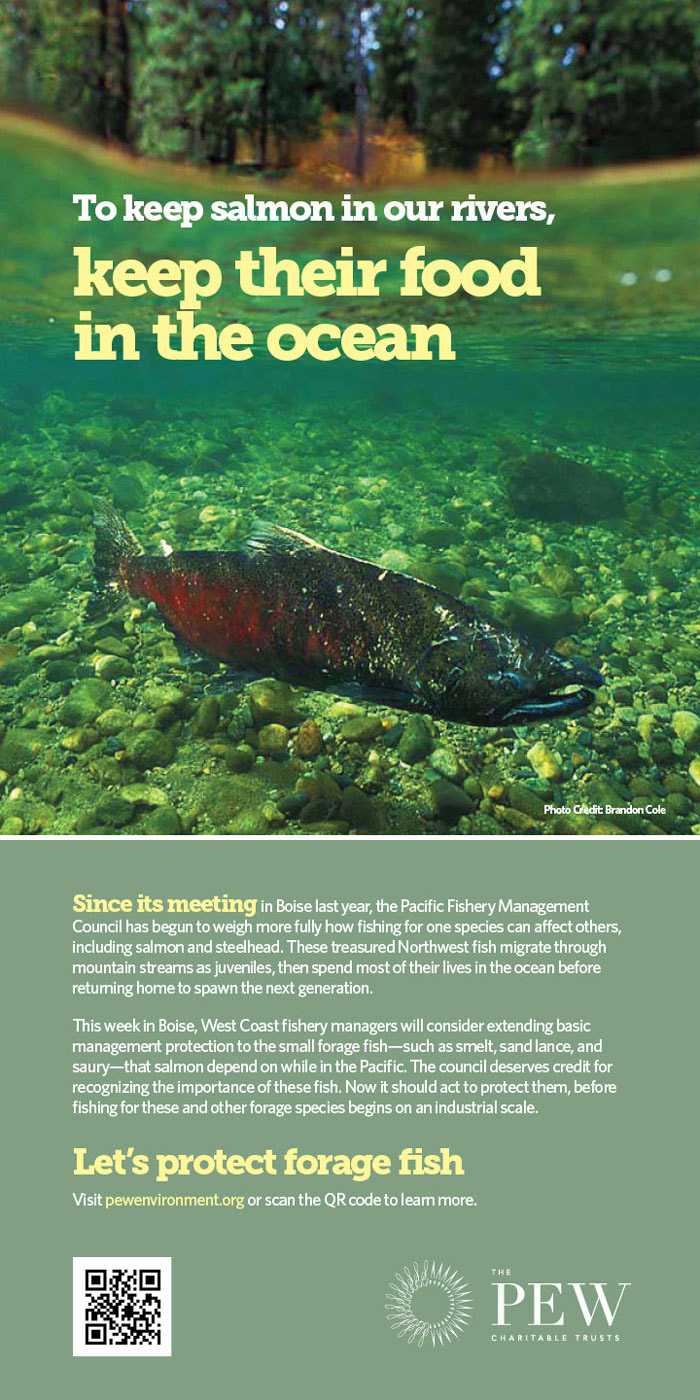