The National Oceanic and Atmospheric Administration's Fisheries Service today proposed bluefin tuna regulations that would have a direct impact on fishermen from Texas to Maine. The proposal is a step in the right direction for ending the waste of depleted Atlantic bluefin, but changes are needed to more fully protect these fish and ensure that those who catch them selectively are rewarded for their efforts.

Atlantic bluefin tuna are incredible animals. They grow up to 10 feet long, weigh as much as 1,500 pounds, and live as many as 40 years. But the population of western Atlantic bluefin tuna has declined by 64 percent from its 1970s level, due to decades of overfishing and use of wasteful fishing gear such as surface longlines, which indiscriminately catch and kill these tuna.

The proposal includes several important changes to current regulations, but it can be strengthened. Here is a look at the proposed measures, as well as improvements that could be made to strengthen them: 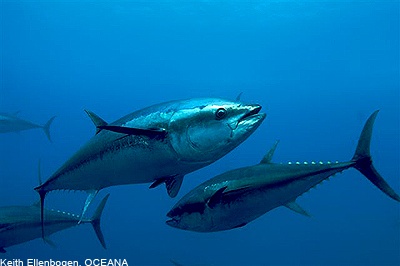 For the past 30 years, NOAA Fisheries has tried to limit the number of Atlantic bluefin caught and killed by surface longlines. Those measures have included prohibiting the targeting of bluefin in the Gulf of Mexico, closing certain areas to surface longlines, and requiring the use of “weak” hooks, intended to straighten out so large bluefin in the Gulf can free themselves.

So far, nothing has provided an effective long-term solution. In fact, U.S. surface longlines catch more bluefin tuna in the Gulf now than they did before 1982. A recent report from NOAA Fisheries shows that the surface longline fishery in the Gulf of Mexico and western Atlantic Ocean wasted almost 25 percent of the entire U.S. bluefin tuna quota in 2012. This gear also catches and kills more than 80 other types of nontarget ocean wildlife, including depleted blue marlin, sharks, and endangered sea turtles.

Bringing bluefin populations back to healthier levels is a goal shared by environmentalists and fishermen alike. Bluefin are apex predators that help keep marine ecosystems in balance and make oceans more resilient. Bluefin are also highly sought after by commercial fishermen and recreational anglers along the Atlantic coast.

Stopping the waste of bluefin on surface longlines would help restore the western population. That recovery would provide more and better fishing opportunities for those who target these fish with selective gear like harpoons and rod and reel.

For the next 60 days, NOAA Fisheries will seek public comments on this proposed rule that could help to stop the waste of bluefin. The comment period ends Oct. 23. The agency will host 10 hearings, during which the public can press for a strong final rule.