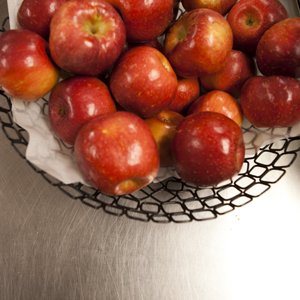 In the Daviess County public schools, the vending machines used to be full of less-healthy items. Vendors stocked them with anything they wanted, which meant lots of candy, soda, and cookies. “It was a free-for-all,” recalls Lisa Sims, the district's school nutrition director. Not only were students buying high-calorie food and beverages from the machines, but teachers were passing out candy as rewards and permitting treats nearly every day for classroom celebrations.

State legislators, alarmed by Kentucky's high rate of obesity, were poised to pass a law restricting snack foods in schools. So in 2004, the year before the new rule would take effect, the Daviess school district formed the Healthy Student and Staff Initiative to set guidelines that would limit students' intake of fat and sugar, increase their exercise, and put them—and the rest of Owensboro—on the road to better health. The group, consisting of students, teachers, parents, principals, nutritionists, physical education teachers, psychologists, community representatives, and a nurse, received an unusual charge from the superintendent: Write down everything you want, and don't think about the budget. That's what they did.

Members of the Healthy Student and Staff Initiative formed a plan. They wanted to reduce less-healthy, a la carte lunch offerings and serve complete, nutritious meals that the federal government would subsidize. They wanted to limit what vendors could sell.

Pushback came from several quarters. The vending machine operators fought to preserve sales. Coaches fought for sport drinks. Teachers didn't want to give up their habit of distributing goodies. A high-ranking district administrator said it was unfair to limit food options for adult staff by curbing vendor-provided, sugar-filled snacks and drinks. But the committee persevered, and the first set of new rules took effect in 2005. The district had a more difficult time determining what to do about classroom or schoolwide parties but found middle ground by limiting events involving snack foods, such as birthday parties, to one a month.

After nutrition guidelines took effect and a la carte offerings were limited, more students ate the school-prepared meals that were eligible for federal reimbursement. In 2004, 66 percent of high school students ate school lunches; now 73 percent do. Overall last year, 75 percent of students in the district ate school lunches and 32 percent ate school breakfasts. There has been no real backlash because adults and children alike seem to embrace the idea that students need nutritious meals. And the administrator who fought to allow adults access to sugary and salty snacks? He became a leading advocate for the new policies.

Success follows when students are involved in the nutritious changes being made to their meals and snacks. The district included kids in the group that established the guidelines and let them help choose some of the food they would be expected to eat. Students were also invited to conduct taste tests to select the baked French fries to replace the deep-fried versions. The same was done for baked goods using whole grain flour. In both cases, students chose the “premium” product, and the district went with their selection in order to smooth the transition.