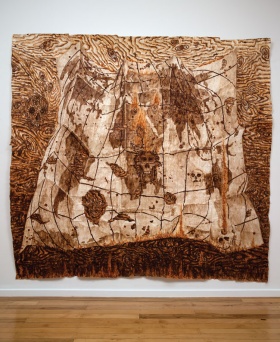 Australian artist Fiona Hall’s most recent paintings on barkcloth are compelling, angry and dark – the urgent response of an artist observing the demise of the natural world. Virginia Were spoke to Hall while she was in New Zealand on an artist’s residency at Two Rooms.

In 2011 Fiona Hall, who is regarded as one of the most influential and critically acclaimed artists working today, joined a group of New Zealand artists aboard the New Zealand naval ship Otago. They travelled from Auckland to Raoul Island in the Kermadec Group, then to Tonga, following the 1000-kilometre-long Kermadec Trench – the second deepest oceanic trench in the world. Filled with active undersea volcanoes and populated by many as-yet undiscovered species, the Kermadec Trench is one of the world’s last relatively untouched wilderness areas.

Pew Environment Group funded the voyage, and the artists travelled with the specific aim of convincing the New Zealand Government to declare the Kermadec Trench a marine reserve, protecting it from the imminent threat of mining and fishing.

Since then the resulting exhibitions have taken on a life of their own, first opening in Tauranga then travelling to Auckland, Wellington and Santiago. This summer one will tour to the Navy Museum in Devonport.

For Hall, whose love of nature and close scrutiny of the natural world is manifest in her interdisciplinary art practice, the voyage was a watershed. Until then her art had been mostly land-based. After the voyage she turned her penetrating gaze seawards. It also marked the beginning of her use of Tongan barkcloth as a substrate for large, eerily beautiful paintings populated by the sea life of the Kermadec Group.

On board Otago Hall became good friends with New Zealand artist Robin White, who has a long history of working with barkcloth and whose recent exhibition of large barkcloth works at Two Rooms resulted from a collaboration between White and Tongan New Zealander Ruha Fifita. After the voyage Hall met Fifita in Tonga, and from her, learned the rudiments of preparing and painting on barkcloth (called tapa throughout the Pacific), using traditional ochres and dyes.

“My way of working with the medium is very different from the Tongan one, and the traditional practice across the Pacific,” says Hall. “I’m using it to paint in a comparatively Western way. So there wasn’t a need for me to learn about the kupesi process.”

In the elegaic paintings, made after the voyage, Hall divided the pictorial space into grids, containing fragments of text (including the words “On your watch Mr Key, which side are you on?”) and images of Kermadec species. This gave the works the feeling of protest banners, which in many ways they are.

In Ghost Net, 2011, Hall imagines the future of the Kermadec Trench if it’s not protected. The skeletal forms of animals are hopelessly entangled in ‘ghost nets’ – lost or abandoned nets that drift in the ocean indiscriminately ensnaring and killing sea life as they go. Scrimshaw, 2011, is like a catalogue of ships, ranging from a European sailing ship and a Polynesian canoe to modern warships and factory fishing vessels. The skeleton of a whale is contained within the shape of a coffin; a skull and crossbones in the top right corner serve as a warning and an allusion to piracy.

Scrimshaw and Spill, both painted in 2011, were Hall’s response to the grounding of the container ship Rena on Astrolabe Reef in Tauranga, which happened only months after the artists’ voyage. “For all of us on the Kermadec trip, Rena was a very timely reminder of the issues we were dealing with, and the show opened first in Tauranga, the port city close to where the disaster happened. But that wasn’t enough to remind your government of the true danger and risks of offering mining permits to companies wanting to mine the area,” she says.

Despite the undoubted success of the Kermadec exhibition in raising public awareness of the need to protect the area, the main goal, which was to convince the government to declare it a marine reserve, hasn’t been achieved. In that context, I asked Hall if she thinks art can be an effective political tool?

“Yes it can be, but it’s mostly like litmus paper in that it detects and brings to the forefront the issues of the day – there are many historical precedents. Whether it changes the course of events in a major way, I’m not sure. It shows up some of the agendas, bringing them to attention – and because the arts are at the vanguard, it’s always a bit ahead of the game. The litmus paper shows up what the game is, although it may not persuade governments or dictators or despots to change an agenda.”

Two years after the Kermadec voyage, the wood grain pattern on the coffin in Scrimshaw re-appears in the recent series of paintings made during her Two Rooms residency earlier this year. An exhibition of these works, titled Veneer, will open at the gallery in late August. The title is metaphorically rich when you consider wood veneer is a byproduct of trees and forests, which are a shrinking resource, and the fact that veneer is also associated with superficiality and concealment.

Though they’re also painted on barkcloth (made from the bark of the paper mulberry tree) the recent works are very different from the Kermadec works. Rather than addressing a specific environment, these paintings are more universal in scope – and more angry, expressionistic and intuitive. Hall is looking at the wider picture of environmental destruction and loss of habitat, and the role humans play – with our propensity for conflict and warfare – in this unfolding disaster, which will eventually affect us all.

“The Kermadec work was all Kermadec driven,” she explains. “The current work is coming from a very different psychological place, although, like much of my recent work, it refers to the demise of the natural world, and also to the mix of politics at large with environmental politics. Politics at large too often means warfare. Over the last few years I’ve been working a lot with military camouflage patterns and garments in several contexts – they are indicators of nations participating in skirmishes across the world. Those issues are still driving some of my current work, but in other work, including the paintings I’m doing for the Two Rooms residency, the work is less attached to specific political agendas, and coming more from an emotional response to the state of play in a world which many of us would agree is a fairly calamitous place. You could say it always has been, in all sorts of ways. Humans seem to be hard-wired for conflict.”

Hall says in the recent paintings she wanted to bypass the stringently logical thought processes underpinning earlier work and to tap into a more subjective and emotional register. In one work, Take No Prisoners, a world map is crumpled and torn, seemingly caught in the act of being unfolded. Its surface is covered with blotches and stains, which seem indistinguishable from the soft, blurred shapes of continents and islands. Latitudinal and longitudinal lines are bent and warped, adding to the sense of contagion and disorder.

“Maps are quite beautiful when they’re unfolding. You see all the fold marks and the undulations of the map along with the undulations of the territory that is depicted,” she says. “In this work there are a few holes and a couple of skulls, and the one in Africa is of a chimpanzee. There’s the widely acknowledged evolutionary theory that we all came out of Africa and share the majority of our genetic makeup with other primates – so in that work there’s a specific logic, but you wouldn’t have to know that to respond to the painting.”

The skulls, which morph in and out of the map and the wood grain background, carry a similar sense of horror as Edvard Munch’s famous painting The Scream of Nature, 1893, in which a figure with an agonised expression is seen against a landscape with a tumultuous orange sky. While walking along a path at sunset, the Norwegian expressionist painter saw the clouds turn blood red above the dark blue fjord below him. Writing of the experience that sparked the painting, he said: “I sensed an infinite scream passing through nature”.

Like Munch, Hall seems to have sensed this scream and in these paintings we can hear its echo and feel her despair at the current state of the world. “It’s an emotive, angry response, but also cynical and sorrowful,” she says.

A similar emotional intensity can be felt in her installation Fall Prey, a commissioned work made last year for dOCUMENTA (13) in Kassel, Germany. Fall Prey comprised a rag-tag menagerie of critically endangered species constructed from military camouflage garments and worthless discarded objects from the species’ country of origin. These creatures, which appeared like trophies mounted on the wooden walls of a hunter’s hut, were sourced from The International Union for the Conservation of Nature’s (IUCN) register of endangered species, including a Californian Condor and a Mexican Axolotl. As always the craftsmanship in these works is exceptional, as is the connection between Hall’s choice of materials and the subjects driving the work.

This year Fall Prey formed the core of Hall’s survey exhibition Big Game Hunting, shown at Heide Museum of Modern Art in Bulleen, Victoria. In David Hansen’s catalogue essay for Big Game Hunting he discusses her use of camouflage: “… the military fabric is not in fact singular, but a complex if compact triple trope, which embodies conflict, plant ecology and disappearance. In her presentation of camouflage as this three-headed allegorical device, we can begin to see both the distinctiveness and the distinction of Hall’s practice: its multivalence, its vegetal energy, its reaching branches and rhizomic meanders, its wondering, wandering, ambitious and generous expansiveness. Or to shift to another corner of the camouflage triad, she is not content with the one clear shot, but employs the rapid fire of a fully automatic assault weapon.”

Hall’s recent barkcloth paintings are no exception. Although the subject matter of these works could not be more serious, their earthy sensuality and tactile beauty makes them dangerously seductive. For Hall, beauty is a lure, used to stop us in our tracks and alert us to a painful reality – human destiny is inseparable from that of the natural world. These paintings will certainly do that.