One of the most debated issues before Election Day (until lines at the polls grabbed the spotlight) was the requirement that voters present photo identification at polling places. 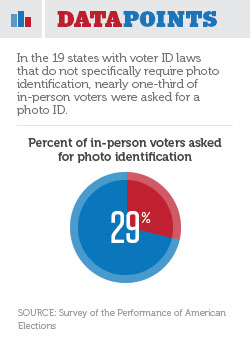 Respondents to the 2012 Survey of the Performance of American Elections supported photo ID requirements at the polls, a finding consistent with other polling data. Nationwide, 71 percent were in favor of strict laws that compel all people to show a government-issued photo ID when voting.

There was a good deal of inconsistency, however, in how states implemented their voter ID requirements on Election Day. The survey, conducted by Charles Stewart III, Kenan Sahin distinguished professor of political science at the Massachusetts Institute of Technology, in partnership with The Pew Charitable Trusts, reveals: