The European Parliament's Fisheries Committee voted last week by a slim majority to reintroduce subsidies for the construction of new fishing vessels and fleet modernisation. If the close vote—12 in favour, 11 opposed, and two abstentions—is supported by the Parliament's plenary in October, and subsequently by the EU Council of Ministers, these subsidies would maintain the already oversized European fishing fleet that is estimated to be two to three times larger in some fisheries than can be sustainably supported.

In short, if allowed to stand, the Fisheries Committee vote would contribute to current overfishing problems.

Ignoring public and expert opinion, the European Parliament's Fisheries Committee is proposing to use taxpayers' money to finance overfishing.Uta Bellion

The Committee voted on the proposal for the future European Maritime and Fisheries Fund, or EMFF, which is meant to facilitate the implementation of the Common Fisheries Policy. The policy commits to ending overfishing by 2020 at the latest and to rebuild fish stocks. To grant subsidies for more fishing vessels runs counter to these goals, which are supported by many Europeans and fishing experts.

“Ignoring public and expert opinion, the European Parliament's Fisheries Committee is proposing to use taxpayers' money to finance overfishing,” says Uta Bellion, The Pew Charitable Trusts' EU Marine Programme director and co-ordinator of OCEAN2012. Using €1.6 billion ($2 billion) to build more than 20,000 new fishing vessels would fuel overfishing and undermine the potential gains of the reformed Common Fisheries Policy. Phasing out such subsidies was one of the important successes of the previous in 2002.

“Reintroducing them would also contravene the EU's international commitments to end the harmful subsidies that contribute to overfishing,” adds Bellion. “We are now looking to the European Parliament's plenary session in October to overturn this vote and help end overfishing." 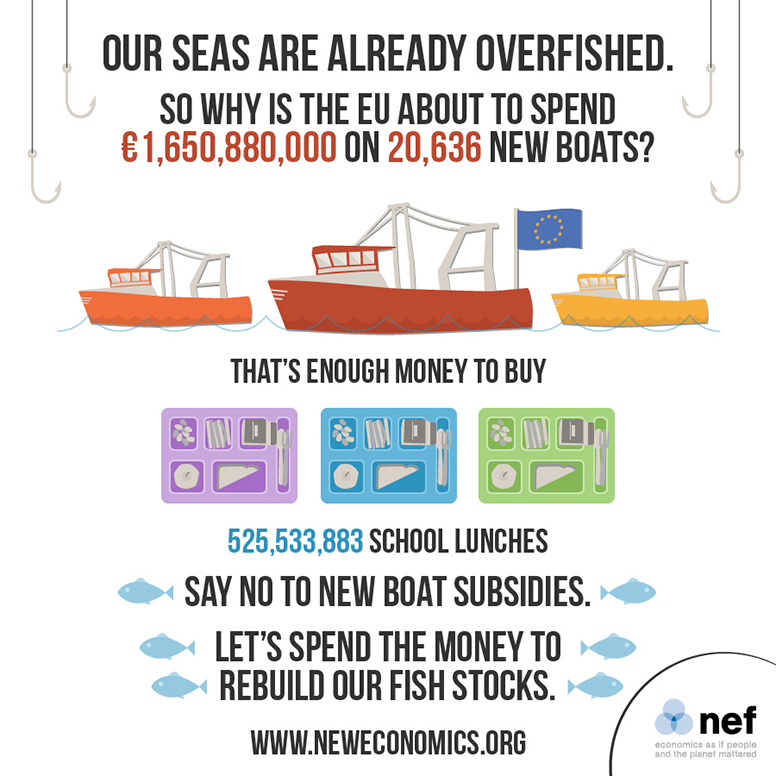 Find out more about why subsidizing new vessel construction is bad news for EU taxpayers and our oceans in a briefing by OCEAN2012 steering group member, the new economics foundation.

All 766 members of the European Parliament are scheduled to vote on the EMFF proposal in October, providing an opportunity to reverse the Fisheries Committee's vote and demonstrate to citizens that the EU is determined to rebuild fish stocks and the viability of the fishing sector. This vote will be followed by negotiations between representatives of the Parliament and the EU fisheries ministers. The conclusions of these negotiations also will be put to a vote by the Parliament and Fisheries ministers.

The final deal on the EMFF could significantly affect the EU's ability to deliver a reformed Common Fisheries Policy that truly ends overfishing and rebuilds fish stocks. The Pew Charitable Trusts is working to ensure that the EMFF supports measures aimed at improving data collection and scientific knowledge of fish stocks, control and enforcement, and the dissemination and adoption of selective fishing gears. These steps would improve the state of fish stocks and well-being of coastal communities.