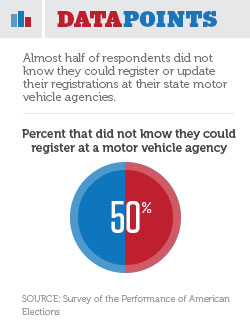 Over the past several decades, concerted state efforts have made it easier for people to register to vote, but there are still misconceptions about the process. Almost half of respondents in the 2012 Survey of the Performance of American Elections, conducted by Charles Stewart III, Kenan Sahin distinguished professor of political science at the Massachusetts Institute of Technology, in partnership with The Pew Charitable Trusts, did not know they could register or update their registrations at their state motor vehicle agencies. Additionally, 1 in 3 respondents mistakenly believed that when they move, election officials or the U.S. Postal Service automatically update their voter registrations.

Seventy-five percent of respondents supported requiring states to make automatic updates of voters’ addresses when they move. Of the 11 reform proposals the survey presented, this was the second-most popular, behind requiring electronic voting machines to print a paper backup of the ballot.