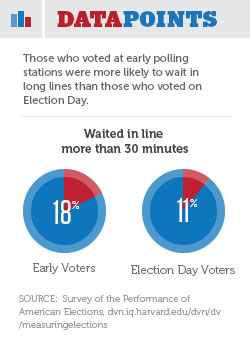 Today’s data dispatch is the first of five that will take a closer look at the 2012 Survey of the Performance of American Elections. The survey, conducted by Charles Stewart III, Kenan Sahin distinguished professor of political science at the Massachusetts Institute of Technology, in partnership with The Pew Charitable Trusts, asked 10,200 registered voters nationwide about their experiences in the 2012 presidential election.

Lines at the polls were the big story in election administration in 2012, and data from the survey provide a clearer picture of who waited in line and where: