What would you do if you controlled what fish could be caught in one-fifth of the ocean? One regulatory body—the Inter-American Tropical Tuna Commission, or IATTC—manages tuna fisheries across 68 million square kilometers (26 million square miles) of the Pacific Ocean. That’s about 20 percent of the world’s total ocean area. 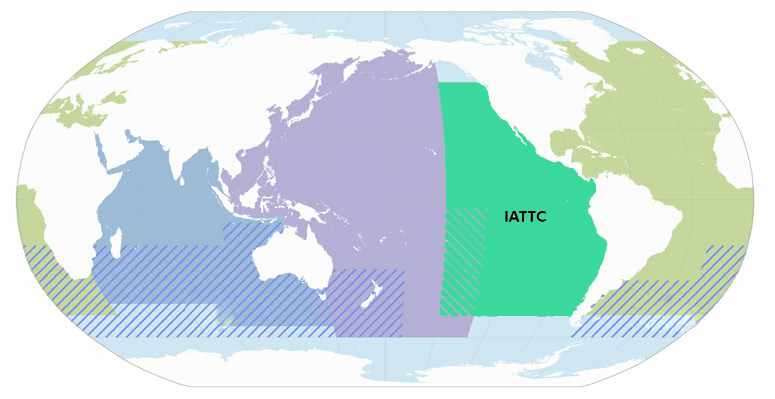 As the IATTC convenes for its 85th annual meeting in Veracruz, Mexico, in June, The Pew Charitable Trusts is urging the organization to act decisively to ensure that tuna and shark fishing within its area is legal and sustainable for the future.

Here is a look at some of the issues affecting these important species.

The Pacific bluefin tuna is in dire straits, according to scientists. Its population has declined by more than 96 percent since commercial fishing began and has dropped 70 percent in just the past 15 years. In addition, 100 percent of the Pacific bluefin caught in the eastern tropical Pacific are juveniles, taken before they are old enough to reproduce. That is a sure way to wipe out a species and destroy a once-vibrant fishery. The IATTC must act quickly to adopt stricter catch limits that will allow this magnificent fish to rebound. Although the bluefin may face the most severe pressure, other tuna species are also at risk. Populations of bigeye are depleted, and even skipjack, which accounts for most of the world’s canned tuna, could soon be subject to overfishing in this region. In light of these declines, and in line with provisions of the Antigua Convention, Pew is urging the commission to set precautionary catch limits based on sound and current science for all tuna species in the eastern Pacific Ocean. The IATTC also must get serious about managing the prolific use of fish aggregating devices, or FADs. These are floating structures, usually with radio buoys for tracking,that are deployed from fishing vessels and then allowed to drift in the open ocean. They attract a wide variety of marine life, including large schools of tunas that congregate beneath them, seeking refuge in the open ocean. FADs are used extensively by commercial fishing fleets in the eastern Pacific to attract and catch hundreds of thousands of metric tons of tuna every year. But that is not all they catch: The devices attract large numbers of juvenile tunas and other marine species, including sharks and sea turtles that are also caught. An estimated 17,000 new drifting FADs are positioned in the eastern Pacific every year. Pew is urging IATTC members to manage this high-impact fishing gear responsibly.

Sharks are among the ocean’s most vulnerable animals, especially in international waters, partly because they lack the fisheries protections and enforcement afforded to many other migratory fish. Some populations of sharks are so imperilled that more than half of the species caught in the high seas are classified as Endangered, Vulnerable, or Near Threatened by the International Union for Conservation of Nature. Hammerhead and silky sharks are particularly affected by tuna fishing in the IATTC convention area in the eastern Pacific. Fishermen may catch these sharks unintentionally or they may target them for their highly valued fins. Whatever the circumstance, measures to conserve sharks in the eastern Pacific are needed. Hammerheads are prized for their highly-valued fins and directly targeted. They are also caught as “bycatch,”, or collateral damage, in fishing gear. The Parties to the Convention on International Trade in Endangered Species of Wild Fauna and Flora, or CITES, recognized in March 2013 the need to protect scalloped, great, and smooth hammerhead sharks because of pressure from fishing. CITES adopted proposals to include the species in its Appendix II and regulate international trade in them. IATTC should complement those measures by requiring the release of any hammerhead sharks caught in fishing gear. Similar measures also should be adopted for silky sharks in the IATTC region, where the species has declined significantly, data show. In light of the serious depletion of shark populations in the eastern Pacific, the commission should strengthen existing rules on shark finning by prohibiting the removal of fins at sea. It also should act to reduce incidental catch of sharks by banning the use of wire leaders on longline vessels, prohibiting the intentional setting of purse seines around whale sharks, and requiring that FADs be made of materials that are less likely to entangle sharks.

To achieve and maintain a sustainable tuna fishery and ensure compliance with international measures to protect sharks, the IATTC must also rein in illegal, unreported, and unregulated fishing in the convention area. Pew believes that ending illegal fishing requires a multifaceted approach, with strong laws and enforcement both at sea and in port. Of particular concern is the link between IUU fishing and other, more serious crimes, such as drug and arms smuggling and human trafficking. These crimes, which are documented by the United Nations Office on Drugs and Crime, occur in waters managed by the Inter-American Tropic Tuna Commission and require urgent and coordinated responses. If the commission wishes to strengthen its control and compliance mechanisms, it needs to begin by adopting a system of minimum standards for inspection of vessels at port to prevent the entry of illegally caught fish in the harbors of member States. Also needed are measures to share information and identify vessels engaged in unlawful activity. The starting point for this is a mandatory system of unique vessel identification numbers—specifically International Maritime Organization, or IMO, numbers—for all tuna fishing and support vessels. The number would accompany a vessel from the shipyard to scrapping, similar to a vehicle identification number on an automobile. Without mandatory IMO numbers, pirate fishing operators can easily change the identities of illegal vessels and avoid detection by enforcement officials.