An April New York City Department of Investigation report about the November 2011 general election found the Board of Elections (BOE) could have saved at least $2.4 million by reducing the number of inspectors by about half. 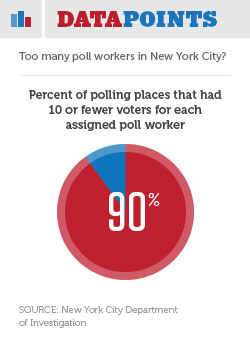 While some stakeholders had suggested the need for fewer poll workers prior to the election due to expected low turnout and many uncontested races, the BOE kept the city’s polling places fully staffed with 28,279 workers for 6,102 election districts.