Western Oregon is home to incredible ancient forests, rare plants, wild salmon populations, and outstanding recreational opportunities. Thanks to a mosaic of micro-climates that create rain forests and dry pine forests, oak savannas, and alpine grasslands, these lands are also some of the most unique and biologically diverse in the United States.

Much of that land is in a special class commonly known as O&C lands. In 1866, Congress established a land-grant program for the Oregon & California Railroad Co. to spur completion of the rail line between Portland and San Francisco. The grant, which was intended to foster settlement and economic development, required the railroad company to sell the deeded land to settlers. Forty years later, after the company failed to fully meet the terms of the agreement, the federal government reclaimed more than 2 million acres of mostly forested land. Today, those O&C lands are administered by the Bureau of Land Management and the U.S. Forest Service. Policymakers and Obama administration officials at all levels have discussed various options for managing these public lands, which include some of the nation's oldest forests and have provided revenue from logging for rural communities in western Oregon.

Last fall, The Pew Charitable Trusts joined conservation groups, timber representatives, and county commissioners on a panel convened by Oregon Governor John Kitzhaber to seek a solution to this long-standing management issue. The ideas that came out of several months of meetings will help inform federal legislation on this issue. To bring the opinions of local communities into the conversation, Pew commissioned a bipartisan statewide poll of likely voters in western Oregon on the O&C lands issue.

The results are telling. Voters, both statewide and in the target counties1, believe that “protecting old growth forests, bodies of water, and the wildlife that live there” is the top priority. “When we asked Oregon voters to prioritize timber jobs and revenue for counties with protections for clean water, ancient forests, and wildlife, a solid majority told us that protection for land and water is most important to them,” said Lisa Grove of Anzalone Liszt Grove Research. (Public Opinion Strategies conducted the polling along with Grove's firm.)

1. The poll oversampled four Oregon counties—Douglas, Jackson, Josephine, and Lane Counties—that contain large pieces of O&C lands and are in serious financial straits due to a lack of revenue from timber harvest. These four counties are identified as “target counties” in the poll results.

The poll also asked voters to choose between two management plans for the O&C lands.

Plan One represents an ecological forestry-based approach in which approximately 500,000 acres would be managed for both timber harvest and conservation values. Clean drinking water, wild salmon and other wildlife, ancient forests, and wilderness areas would be protected from clear-cutting. Plan Two is an approach similar to the Trust Proposal of U.S. Representatives Peter DeFazio (D-OR), Greg Walden (R-OR), and Kurt Schrader (D-OR). That proposal would place more than 1.5 million acres of public forests into a trust managed by timber and local representatives.

When asked to choose between the two plans, a nearly 2-1 majority favored the ecological forestry-based plan. Support for Plan One cut across demographics—gender, age, and political affiliation—with majorities favoring conservation of the state's natural resources over more logging. 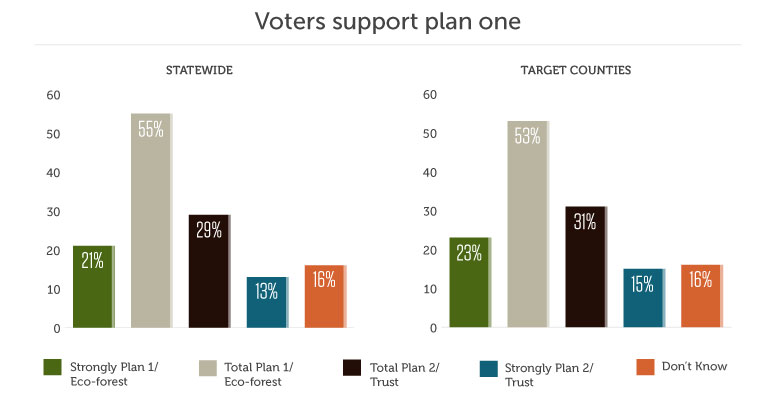 One thing is clear from this poll: Oregonians understand the importance of and want to protect the clean drinking water, ancient forests, wilderness, and wild salmon of the O&C lands. Pew is working with local stakeholders and members of Congress to ensure the protection of these lands and water as a legacy for our children and grandchildren.