Members of Pew's global shark conservation team traveled to Bangkok, Thailand in March for the 2013 meeting of delegates to the Convention on International Trade in Endangered Species of Wild Fauna and Flora, or CITES. In these dispatches, Elizabeth Wilson writes about the importance of the meeting and what success means for sharks around the world.

Why try for shark protections at CITES?

Shark conservation has had a string of victories in recent years with shark sanctuaries being declared in the waters of countries in three oceans, protections for some of the most vulnerable sharks at regional fisheries management organizations, and enforcement at sea and in ports.

These successes have not been achieved without setbacks, however. In 2010, every proposal to list commercially valuable marine species, including eight species of sharks, was defeated at the 15th meeting of the Conference of the Parties (CoP15) to the Convention on International Trade in Endangered Species of Wild Fauna and Flora, or CITES, in Doha, Qatar. At the time, it was a crushing blow for shark conservation efforts.

Why? Because CITES is the only treaty that manages the international wildlife trade at a global level. The convention's 178 member countries meet every three years to vote on proposals that ban or restrict international trade of vulnerable species. Due to the global nature of the fin trade (83 countries exported shark fins to Hong Kong in 2011), a global solution to the major threat to sharks—international demand for shark fin soup—is important if we are to ensure healthy shark populations well into the future. 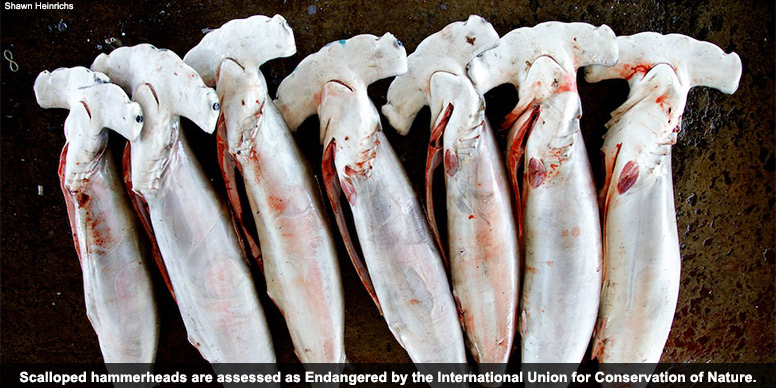 More than 30,000 species are listed on CITES appendices. The protections that these listings have secured are credited with bringing some species back to healthier population levels and preventing others from declining further. Until the CITES meeting in March, and despite the assessment by the International Union for Conservation of Nature (IUCN) of 143 species of sharks as Threatened or Near Threatened with extinction, only three of the 30,000 listed species were sharks: the great white, basking, and whale sharks. The small number is because a proposal to list a species requires that two-thirds of the voting countries support it, something that has proved difficult to achieve for marine fish species. 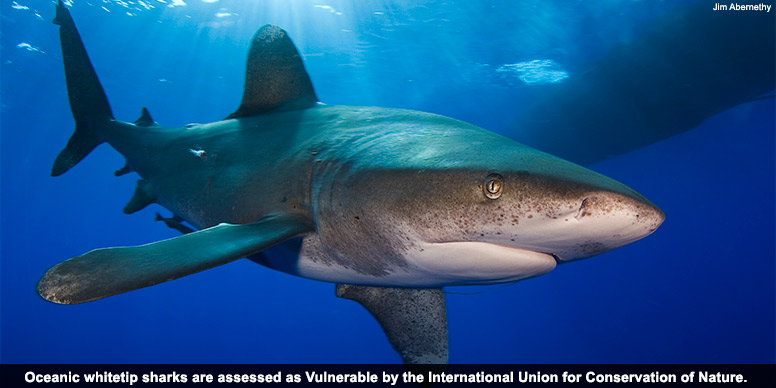 Starting in 2011, the major focus of my first year working at Pew was incredibly ambitious: We wanted to get governments to regulate international trade of some of the most economically valuable, yet ecologically vulnerable and threatened, shark and manta ray species. We had a lot to do and not much time.

The first step was to identify the species of sharks to be proposed for listing at CITES, compile the science to qualify them for protection, worked with countries interested in sponsoring the various proposals and to overcome the arguments used to defeat previous listing attempts. By the Oct. 4, 2012 deadline to submit proposals, 37 countries (including the 27 member States of the European Union) had worked together to co-sponsor four proposals to protect oceanic whitetip, hammerhead, and porbeagle sharks, as well as both species of manta rays. 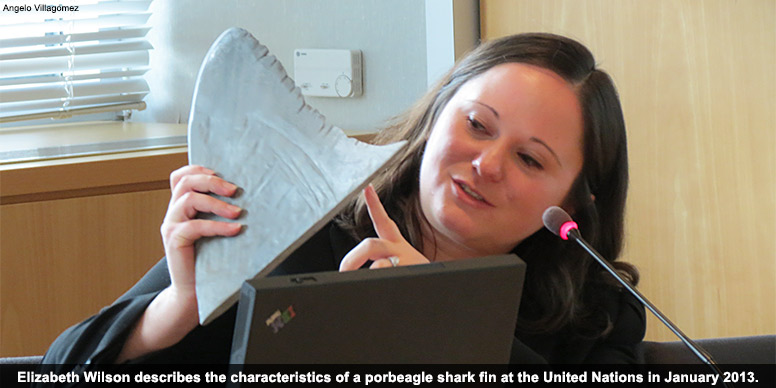 Executing an outreach strategy targeting practically every country in the world is not an easy task, so the team Pew assembled had to span the globe. Our multicultural, multilingual group was situated on every continent except Antarctica. Pew staff and consultants worked with scientists on techniques to identify products in trade from the proposed species, traveled to several key countries, and held regional meetings around the world to build support for the proposals. While it seemed like much of the effort had already been done before the meeting in March, that preparation was only a taste of the hard work to come in those final two weeks in Thailand. 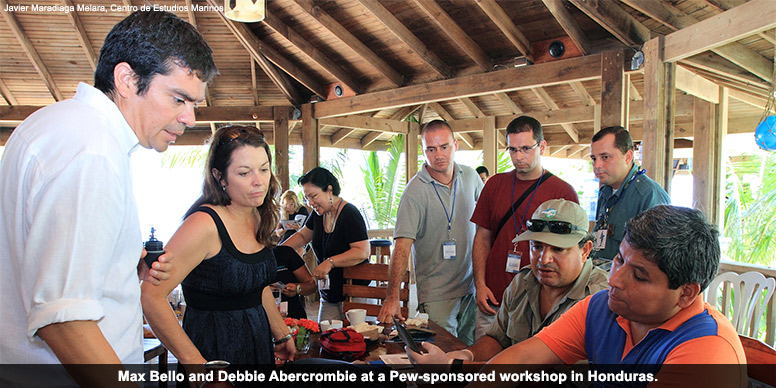 Our time in Bangkok started with a successful media reception to highlight the CITES shark proposals and to introduce a scientific study showing that a staggering 100 million sharks are killed a year, a mortality rate that is too high to maintain healthy shark populations. The paper created significant media attention and helped position the shark proposals among the most high-profile at the meeting. The media reception also helped inform journalists based in Bangkok of the important wildlife meeting taking place in their city and the issues at hand. 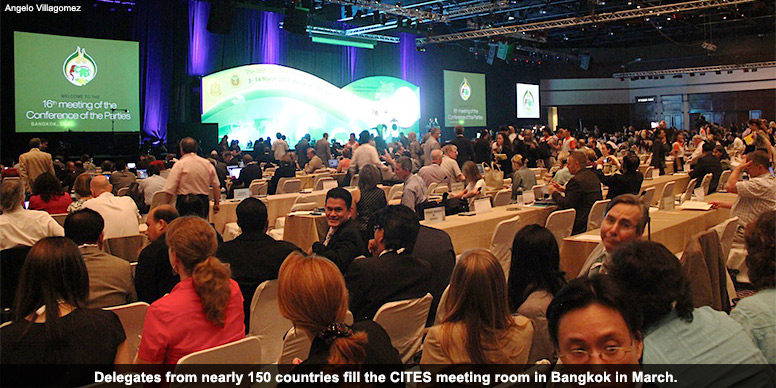 After a beautiful ceremonial start to the conference, including an appearance and speech by the Thai prime minister, the 10-day meeting was underway. And so was our work. This included coordinating events with governments, holding press briefings with shark and manta ray scientists, organizing meetings and receptions, conducting shark fin identification demonstrations, meeting with the sponsoring countries, doing outreach to governments, preparing talking points, and much more. 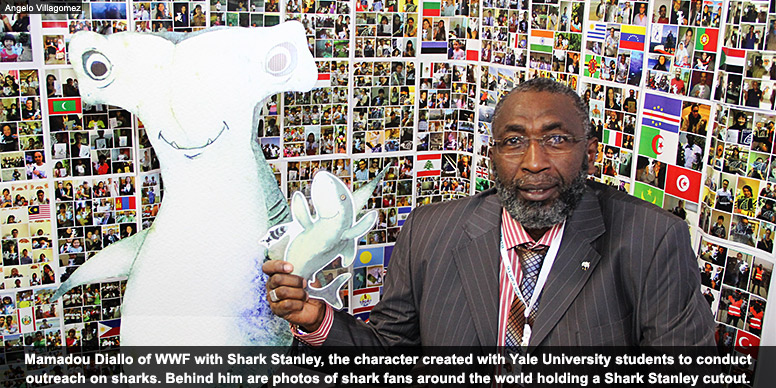 For the last several months, we had been reaching out to every CITES member around the globe to discuss the proposals. Based on these conversations, we hoped and believed the shark and manta ray proposals had the votes necessary to win. But anything can and does happen at a CITES meeting, so we weren't complacent. Instead, we were busily trying to determine how the shark and manta ray proposals could pick up additional votes and maintain the support already pledged. 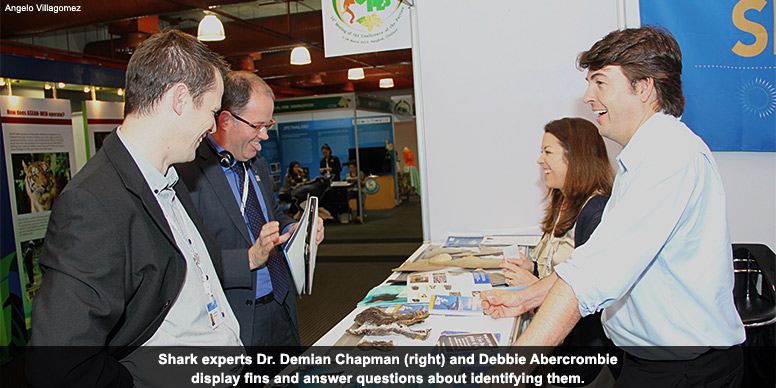 In the Committee meeting, proposals are taken up in taxonomic order. Mammals go first, so we watched votes come and go for the highly publicized polar bear proposal, turtles, and many other species. On the last day of the first week, the members discussed crocodiles, snakes, frogs, turtles, and then the meeting closed—just before the discussion and vote on oceanic whitetips, the very first shark proposal of the meeting. We then spent the entire weekend agonizing over the vote on Monday (and of course strategizing and planning). 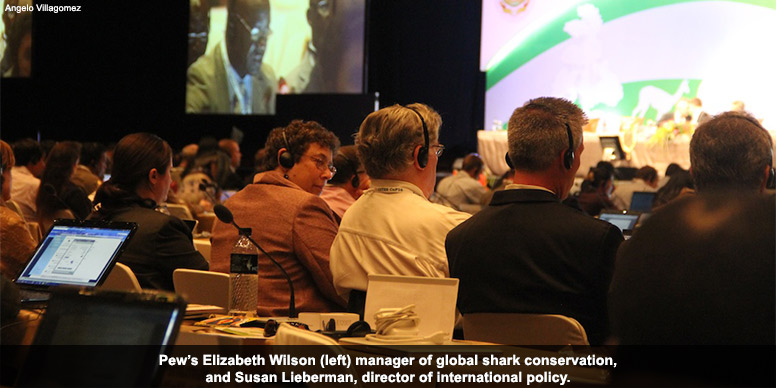 Monday, March 11, was the day we had been working toward and waiting for: the shark votes. This is the big hurdle that has to be overcome for the proposals to move forward. It was a day of great excitement, and the room was packed. Sharks weren't just high-profile, they were highly controversial. Before each vote, countries had the opportunity to give a speech, called an intervention, to highlight their views and positions on the proposals. 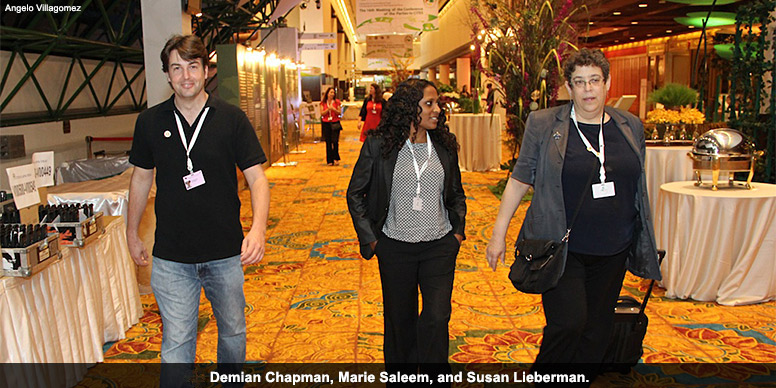 The oceanic whitetip discussion lasted two hours. After 24 interventions (including one from Pew on behalf of several conservation organizations), the chair closed the debate and put the proposal to a vote. Countries have 60 seconds to vote for or against, or abstain. When the voting stops, the results are compiled and displayed on an overhead screen. Under the rules, if one country requests a secret ballot, and the request is seconded by at least 10 countries, the poll is secret (no one ever sees who voted which way). For the oceanic whitetip and all the other shark proposals, all votes were secret.

After a half-second delay to absorb the results of the balloting and see that the two-thirds requirement had been met, the room erupted in cheers and applause. Oceanic whitetip had passed by two votes!

The process was repeated for the three remaining proposals to list sharks and manta rays under CITES. The discussion for each proposal was as heated as the first, and the chair had to stop the debate and call for a vote even though many more countries wanted to speak. One by one, the proposals passed. 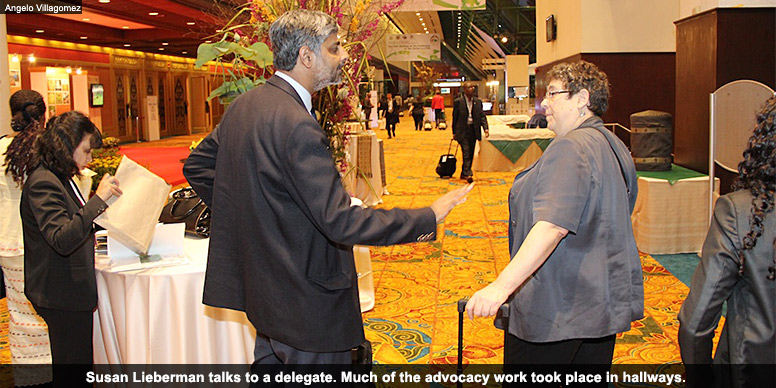 But it was bittersweet, because we knew the opposition would surely try to reopen the proposals at the end of the meeting, March 14, when they all move into the main meeting. Either way, there was excitement over the very real potential of having CITES protections for seven new shark and ray species.

It was an anxious few days for us as we continued to build support. Pressures were intense, particularly on some small countries. Countries are allowed to call for reopening a proposal in plenary—in front of the entire conference—if a technical issue needs to be discussed, but they also can call for a revote simply because they did not like the results in committee. It takes one-third of the countries voting to reopen the debate. This happened in 2010 when a proposal to protect porbeagle sharks was adopted by Committee I, but reopened (by one vote) and overturned in plenary. This was very much on our minds as we continued our advocacy throughout the week.

We encouraged countries to stand by their vote and not reopen the proposals when the sharks came up in plenary. When March 14 arrived, I thought my heart was going leap out of my chest, a feeling I hadn't had since my wedding day. Who knew that marriage and marine conservation could both evoke such nerves and excitement!

The final vote was upon us.

The oceanic whitetip shark proposal was first up. Japan had signaled its intent to reopen the committee decision. This aroused a mix of emotions in the room, ranging from anxiety to resentment. I was in the anxiety category.

As expected, Japan called to reopen the discussion and take another vote. After statements by countries from around the world saying the previous adoption of the oceanic whitetip proposal should stand, the vote to reopen the debate was called. The motion failed—narrowly but decisively.

Cheers (and some tears) of joy erupted in the room. We knew we would leave this meeting with at least one new shark species protected. 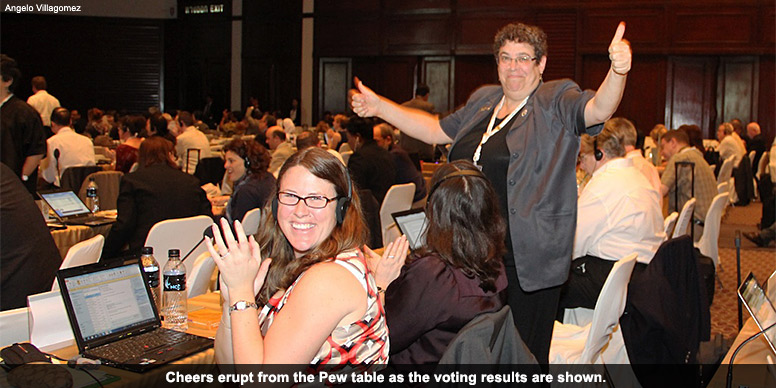 Then it was on to hammerheads. This time China called for a new vote. Again, the vote to reopen the debate failed. We now had certain victory for four species (because there were three hammerhead species in the group to be listed). We all held our breath to see if there would be a move to reopen the porbeagle shark debate. Fortunately, at this point, opposing countries gave up. They did not try to reopen the debate on this or the manta rays. 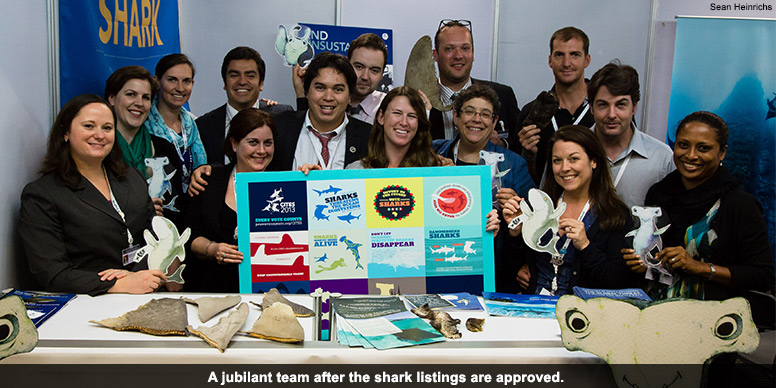 These seven species will now receive global protection as the international trade in their products will be strictly regulated. These new measures will also have a much broader impact on shark conservation. Since these new shark species were primarily targeted for their fins, their listings will cause a fundamental shift in the global shark fin trade because increased monitoring and reporting will now be required. Countries that do not regulate shark fishing will have to devise fisheries management measures or prohibit the export of these species. The development of fisheries management capabilities in these countries will have spillover benefits for other shark species as well. In addition, some countries may decide that the simplest way to implement these CITES protections is to prohibit shark fishing and declare their waters a shark sanctuary—and that would be amazing for sharks and the broader marine environment, because we know that vibrant shark populations mean healthier ocean systems.

It also became clear during the meeting that momentum is growing for shark conservation, particularly in regions such as Latin America and Africa. This momentum is likely to help enhance other conservation and management efforts, including measures at regional fisheries management organizations, national shark fishing regulations, and the establishment of new shark sanctuaries.

This game-changing event did not occur by chance. It took years of strategic planning and hard, dedicated teamwork. Shark conservation and management—and CITES—will never be the same.