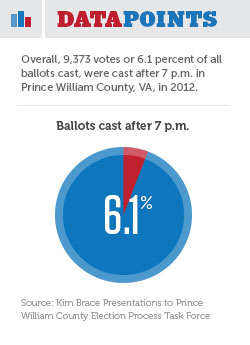 Like its neighbor Fairfax County, Prince William County, VA, established a bipartisan task force to examine long lines faced by some of its voters at the polls during last November’s general election.

In a presentation to the task force by Kim Brace, a member of the task force and president of Election Data Services Inc., precinct-level data were examined to help clarify the scope of the problems.

The report found that of the county’s 77 precincts, which together had 254,649 voters registered: