Every so often we have the good fortune to cross paths with somebody who truly has made a significant difference in our lives. Ginny Wood was such a person to me. Ginny died on March 8 in the cabin in Dogpatch, Alaska, at the end of Muskox Trail where I had on many occasions visited her and her lifelong friend, Celia Hunter. She was an effervescent presence, always busy, eager to talk, and an inspiring influence on me when I first started my conservation career at the Northern Alaska Environment Center in the 1980s and for years afterward. She broke trail, both literally and figuratively.

Ginny served her country during World War II in the Women's Air Force Service Pilots (WASPS) ferrying fighter and bomber planes around the lower 48, and that's where she met Celia, both in their twenties. After their service in war, they found work with a Fairbanks flight operation to fly military surplus planes to Alaska – in the dead of winter, with temperatures in the minus 50s and 60s Fahrenheit. Grounded more days than they could fly, they were shuttling planes and cargo to Fairbanks, Kotzebue, and Galena. By the time they were done, it was spring, and they decided they might as well stick around to see what summer was like. They never left.

Ginny and her husband, Morton Wood, purchased property at the edge of Mt. McKinley National Park and built Camp Denali, a rustic wall-tent outpost that catered to adventurers in the ecotourism mold, well before that fad became hip. Celia also joined them in this endeavor. Hundreds of guests through the 1950s and 1960s became familiar with indigenous flora and fauna in the shadow of North America's tallest mountain. During the off-season, they based themselves outside of Fairbanks, in Dogpatch, and built a log cabin heated by a wood stove. As an active member of her neighborhood trails association, Ginny cleared and maintained miles of cross-country ski trails in the woods around their neighborhood, and continued doing that well into her 70s. She had a garden, sometimes two, fenced to keep the moose from grazing on her lettuce and cabbage and carrots. I'm uncertain whether I ever saw Ginny without dirt under her fingernails. 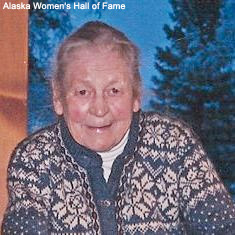 Ginny was a trail-breaking conservationist in Alaska's early days as a state. She and Celia formed the Alaska Conservation Society (ACS) in 1960 – the state's first conservation group – in their Dogpatch cabin, with a handful of others who had come to know Olaus and Mardy Murie and their biological surveys of northeastern Alaska. The Alaska Conservation Society joined the Muries in their quest to establish the Arctic Wildlife Range. ACS's two hundred or so local members teamed with The Wilderness Society, on whose governing council Olaus served, and other groups to convince President Dwight Eisenhower to issue an executive order establishing the wildlife range at the end of 1960.

Not all Ginny's work resulted in significant conservation gains. She and her band of like-minded folks toiled hard to raise awareness of major boondoggles and grave threats to Alaska in the first years after statehood.

The U.S. Corps of Engineers proposed damming the Yukon River – the world's 20th longest river and a major source of Chinook, coho, and chum salmon runs, 30-50 percent of which return to Canada -- at Rampart Canyon, about 105 miles northwest of Fairbanks. First proposed in 1954, the dam would have flooded an area the size of Lake Erie, and would have cost $1.3 billion in 1970 dollars, including nearly $16 million to relocate Native Alaskans who would have been displaced from inundated villages. In economic, energy, and environmental terms, the project just didn't make sense, yet both presidential candidates in 1960, Richard Nixon and John Kennedy, supported it. It wasn't until 1967, after a decade of scientific and economic arguments, did President Lyndon Johnson's interior secretary, Stewart Udall, pull the plug on the dam.

Next came Project Chariot, an outlandish plan to detonate a series of five nuclear bombs on the coast of the Chukchi Sea at Point Thompson to crater out a man-made harbor, with little regard to concerns about fall-out on Inuit communities and the lands and animals on which they depended. In this David-versus-Goliath battle, Ginny and Celia again level-headedly joined forces with scientists at the University of Alaska-Fairbanks—scholars who eventually were dismissed from their positions because of their stances—to make the scientific case for the dangers and impact to Native Alaska communities that would accrue from five detonations totaling 2.4 megatons. Plans were scaled back first to 460 kilotons, and then 280 kiloton blasts. Even so, no customer could be found to take on the harbor as a going business concern, so the researchers – including Edward Teller and the U.S. Atomic Energy Commission (AEC) – decided to turn the project into a study on the impacts on the indigenous communities of Point Hope, Noatak, and Kivalina. In a sign of how incredible the whole notion was, the researchers wanted to measure the size of bomb necessary to render local food sources for dependent communities too dangerous to eat because of radiation levels. They effectively would make the local Inupiat test subjects in the effects of radiation on the caribou they hunted for subsistence.

Once again, Ginny and her local colleagues with the Alaska Conservation Society joined forces with others nationally who were concerned about the radiation impacts of nuclear fall-out, including for instance Barry Commoner, then a plant specialist at Washington University in St. Louis, who formed a Committee for Nuclear Information. They plugged away at the science of radiation's impacts in the food chain. AEC asked for presidential authorization in 1960-1961, and when approval hadn't been granted by early 1962, the AEC sent a letter to President Kennedy saying that if authorization wasn't forthcoming by September 1962, “the experiment should be closed out.” And it was, in part because Nevada tests were providing some of the data sought in the Project Chariot experiment and because of negotiations on a test-ban treaty with the Soviet Union.

Chalk another one up to the prescient perspectives of Alaska's pioneering conservationists, Ginny and Celia, not an easy position to be in when every elected official, every editorial board, and every business supported the position of the Atomic Energy Commission or the Corps of Engineers.

Ginny was intrepid and passionate, and I reveled in hearing her stories. She and Celia had me to their cabin on Christmas Eves when I was too impoverished to make it back home for the holidays. I edited The Northern Line, the Northern Alaska Environment Center's monthly newsletter when Ginny wrote a column, “From the Wood Pile,” her delightfully homespun and always accessible take on environmental issues. Whenever I visited, I would insist she assign me a chore, and it generally involved digging a hole to replace a water pump or fixing the fence around her garden or hauling wood from her driveway to the stack outside the cabin. We'd talk the whole time, and at the end there'd always be a glass of lemonade or cup of tea with some homemade baked good, and plenty more conversation.

Celia died in 2001, and much as I'll miss them both and keep the memories, their greatest legacy is their work to see enacted the Alaska National Conservation Lands Act, which bequeaths to all Americans, for all time, 103 million acres of national parks, national wildlife refuges, national conservation or recreation areas, and wild and scenic rivers – 56 million of it as part of the National Wilderness Preservation System. That's a legacy, one to which we can aspire. Ginny set a great example.