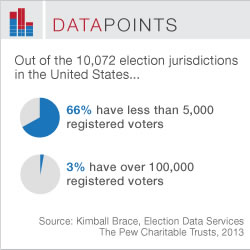 According to information from Kimball Brace, president of Election Data Services Inc., there are 10,072 election jurisdictions in the United States: