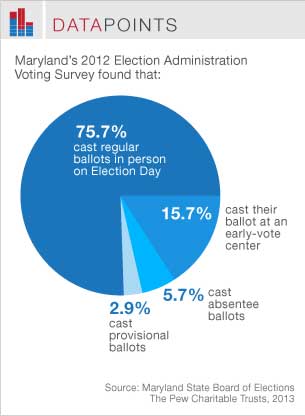 Maryland recently released its 2012 election administration and voting survey, becoming the first state to make its 2012 data available to the public online.

The survey, submitted by all states to the U.S. Election Assistance Commission and administered every two years, gathers data on many issues related to election administration, including voter registration, absentee voting, military and overseas voting, and provisional ballots. Maryland had 3,694,658 active registered voters for the November 2012 election, and 2,734,189 of them cast ballots. Other highlights of the state’s data include: