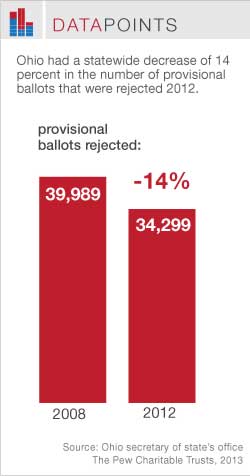 Nearly 210,000 provisional ballots were issued in Ohio in last November’s general election, almost the same number issued in 2008. Compared to 2008, there was a 14 percent statewide decrease in the number of rejected ballots in 2012. Almost 40,000 were rejected in 2008, compared with slightly more than 34,000 last November.

The decline was due to a number of factors, most notably being the rejection of fewer ballots because they had been cast in the wrong precinct or cast without correct identification.