Last year, we noted Wisconsin’s extensive efforts to provide and share data on the costs to administer elections in the state. Recently, 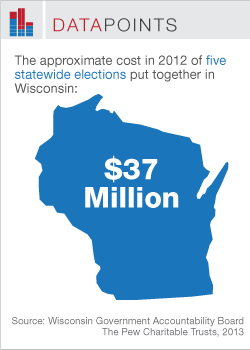 the state provided updated figures showing that the November general election cost slightly more than $10 million. Like other elections the state held in 2012, about one-third of the cost went to paying poll workers.

The five statewide elections in 2012 together cost approximately $37 million.