February was another big month for wilderness in Congress, with members in both houses demonstrating the popularity of land conservation across the West. Five new bills were introduced, bringing the year's total to 11. But The Pew Charitable Trusts' work isn't stopping there, as we expect more wilderness legislation in the weeks and months ahead.

The Front, as Montanans call it, is where the Rocky Mountain's eastern wall of rugged granite meets the boundless horizon of the Great Plains. Here, one can glimpse the American West before urbanization—indeed, before there was an America. It is the last place where herds of elk, deer, antelope, wolves, and grizzly bears still occupy the intersection of mountains and grasslands as their ancestors did for millennia. Whether by accidents of history or the oppressiveness of the ceaseless wind, it is a gift to all Americans that this landscape has escaped the sprawl of similar places, such as Denver and Boulder. 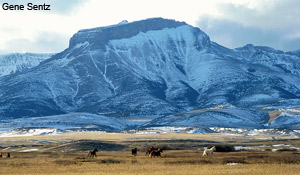 The bill, which resulted from years of negotiations with ranchers and local landowners, would protect 275,000 acres of public land on the eastern edge of the northern Rocky Mountains. The Bob Marshall Wilderness would grow by 50,500 acres and the Scapegoat Wilderness by 16,700 acres. The legislation would also designate 208,000 acres as conservation management areas and prioritize noxious-weed eradication and prevention on the protected lands.

For the state of New Mexico, the Rio Grande del Norte National Conservation Area Establishment Act (H.R. 560/S. 241) was introduced in the House by Representative Ben Ray Luján (D-NM). Identical legislation was introduced by Senators Tom Udall (D-NM) and Martin Heinrich (D-NM), who championed wilderness as a congressman. The measure aims to protect as a conservation area some 235,000 acres northwest of Taos, including more than 21,000 acres of wilderness. The bill designates about 13,500 acres of the Ute Mountain area as the Cerro del Yuta Wilderness and 8,000 acres as the Rio San Antonio Wilderness.

The legislation would also protect the Rio Grande Gorge, one of the great migratory routes in the world, offering nesting places to falcons, eagles, and hawks. 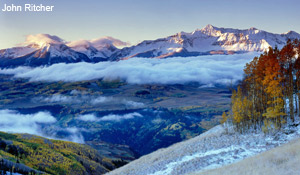 The San Juan Mountain range is one of the most geologically diverse in the world, and is home to the threatened Canada lynx and the Gunnison sage grouse. The Colorado River cutthroat trout, whose status is under review, also swims the range's cold, clear waters.

Perhaps the greatest testament to the incredible value of this landscape is that its protection is broadly supported by local communities, elected officials, ranchers, and recreation groups.

Also in February, Senators Ron Wyden (D-OR) and Jeff Merkley (D-OR) introduced the Devil's Staircase Wilderness Act (S. 352), a measure that would permanently protect nearly 30,000 acres of wilderness on Wassen Creek in Oregon's Coast Range. Considered one of the most secluded locations in Oregon, the area boasts some of the finest examples of classic old-growth forest left in the Coast Range. Many native species are found here, including threatened spotted owls, elk, black bears, mountain lions, river otter, and mink.

The bill would also protect more than 14 miles of Wassen and Franklin creeks under the Wild and Scenic Rivers Act. 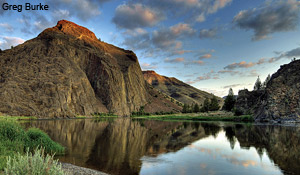 The two Oregon senators also introduced the Oregon Treasures Act (S. 353), which covers five areas in Oregon. In the previous Congress, these areas were contained in four individual bills. The measure would designate 60,000 acres of wilderness on the Rogue River in southwest Oregon and more than 17,000 acres of wilderness in the Cathedral Rock and Horse Heaven areas along the lower John Day River in the eastern part of the state. The Rogue River is one of the most popular recreation designations in the West, and the John Day is the second-longest free-flowing river in the United States. Although the differences are vast, both provide excellent opportunities for fishing and boating. River protections are part of the legislation, with 143 miles of the Rogue and its tributaries protected as wild and scenic, as well as 23.1 miles of the Molalla River east of the Willamette Valley as recreational under the Wild and Scenic Rivers Act. The bill would also protect 3 miles of the Chetco River from destructive mining practices.

Nevada's federal delegation also had a busy month, with both houses moving on multiple wilderness bills. Senators Harry Reid (D) and Dean Heller (R) co-introduced the Lyon County Economic Development and Conservation Act, which would designate 48,000 acres of wilderness in Lyon County, protecting historic cultural and natural resources. It would also convey 12,500 acres to the city of Yerington for economic development surrounding the Nevada Copper mine. Representative Steven Horsford (D) introduced identical legislation in the House, making the Wovoka Wilderness bill the first federal legislation of his career. Also in the House, Representative Mark Amodei (R) introduced legislation to designate the 26,000-acre Pine Forest Range Wilderness in northwest Nevada, with Sens. Reid and Heller sponsoring a similar bill in the Senate. The Pine Forest Range is a popular destination for sportsmen and recreationists and is prime habitat for mule deer, sage grouse, and mountain lions.

All in all, it's shaping up to be a wild session of Congress.