The annual arrival of spring chinook salmon to inland rivers makes March an eagerly anticipated time of year for fishermen and seafood lovers on the Pacific Coast. Anglers wait all year for the chance to land a hulking silvery chinook, commonly known as a king salmon, and consumers enjoy eating this tasty fish.

When it comes to predicting the number of adult salmon that will surge into inland rivers, though, scientists have consistently stressed one factor: the amount of food available for these fish in the ocean.

Salmon depend on abundant populations of small schooling forage fish—including sardines, anchovies, and herring. These oil-rich fish eat tiny plants and animals drifting near the ocean's surface, in the process forming large “bait balls” of nourishment. These are then devoured by bigger fish such as salmon, and by marine wildlife ranging from seabirds to seals, whales, and sharks.

If we want to maintain a vibrant and productive ecosystem, it makes sense to leave enough food in the water for other animals in the food web to consume. A new study by scientists at Oregon State University and the National Oceanic and Atmospheric Administration suggests that abundant prey in the ocean is the most reliable predictor of the number of adult salmon that return to spawn in the Columbia River and its tributaries.

If we want to maintain a vibrant and productive ecosystem, it makes sense to leave enough food in the water for other animals in the food web to consume.Lee Crockett, Director, U.S. Oceans, The Pew Charitable Trusts

This research bolsters the view of members of the Northwest Power and Conservation Council (NPCC), a four-state regional organization with a unique charter to balance the Northwest's environment and energy needs by developing and maintaining a regional power plan and a fish and wildlife program.

The NPCC noted that electric ratepayers spend $250 million a year to offset the damage to salmon habitat caused by federal hydroelectric dams. In a rare letter to the Pacific Fishery Management Council in November 2012, the group cited its own independent scientific analysis, which revealed that the presence of forage fish in the Columbia's estuary and plume is “exceptionally important” in determining the proportion of juvenile salmon and steelhead trout that will return to the river as spawning adults. The group urged fishery managers to follow through on the goal they established last June to prohibit unregulated fisheries on forage fish.

A new report from Pew's ocean science division underscores the importance of forage fish on the West Coast. The analysis found that these baitfish tend to be much more valuable as prey than as catch in ecosystems such as the California Current, where nutrients pulled from ocean depths fuel the growth of phytoplankton (microscopic plants) at the surface. Forage fish swarm to these blooms of life, helping to convert the sun's energy into food for salmon and other fish and wildlife. 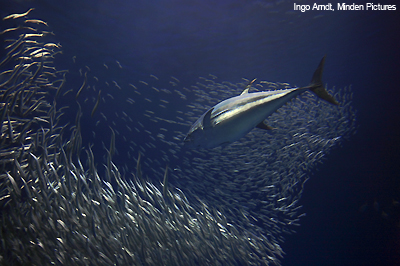 The council is wise to encourage precaution. We know these and other unmanaged species are an important food source for fish and wildlife along the West Coast, and that these same species are already subjected to large-scale fishing pressure elsewhere around the world.   About 90 percent of the forage fish caught worldwide is turned into products such as animal feeds and nutritional supplements. Prices of fishmeal and fish oil have increased substantially over the past year, raising the prospect of new forage fisheries developing even before the science is in place to evaluate the effect on dependent predators such as Columbia River spring chinook.   King salmon trace a remarkable life's journey. As juveniles they emerge from the gravelly bottoms of mountain streams. Then they migrate to the ocean and live there for three to five years before returning to their native waters as spawning adults. It's hard to imagine an animal so tightly entwined in Pacific Coast history, economics, and culture as salmon coursing through the Columbia River basin.   This spring, as fishermen converge on the rivers and seafood lovers throng the salmon displays at local grocery stores, it's worth remembering the little fish that make it all possible.