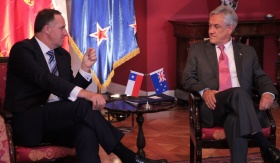 Chile is pioneering marine protection in the Pacific, while New Zealand is dragging its heels over establishing a sanctuary in the Kermadec Islands.

With tourism experts branding Chile the "new New Zealand," is the Latin American country attempting to steal our 100 per cent Pure brand?

Hollywood mogul James Cameron headed into the abyss - and returned with a burning desire to protect New Zealand's last pristine ocean wilderness. Last year the Titanic director made a historic solo dive to the deepest point in the ocean, and government briefing papers released this year revealed he has an interest in conserving the area around the Kermadec Islands.

It is understood he has privately lobbied Prime Minister John Key for the creation of a marine reserve.

Even before Cameron's voyage, some of New Zealand's most influential businessmen were asking Key to show "bold environmental leadership" on the issue.

A June 2011 letter, co-signed by philanthropist Julian Robertson, the late tycoon Lloyd Morrison and his brother Rob came in June 2011, at the height of criticism of New Zealand's 100 per cent Pure brand, following Key's interview with the BBC's Hardtalk.

Backing the 620,000 square km ocean reserve would be "timely and historic," they said. "From a NZ Inc perspective it looks to us, and our colleagues in business, to be a fantastic opportunity to dramatically demonstrate we are serious about our green credentials."

But the National government is dragging its heels and environmentalists suspect it is loathe to dissuade the mining and fishing industries.

Meanwhile, on the other side of the Pacific Ocean, Chile is making huge strides in marine conservation with a government commitment to expand protection across its exclusive economic zone, particularly around the waters of Easter Island. It also established a reserve around the remote Pacific Sala y Gómez island.

Key and Chilean President Sebastian Pinera last night talked in broad terms about sustainability in the Pacific Ocean, but made no firm commitments at a formal meeting in Santiago.

Bronwen Golder, of global conservation lobbyist the Pew Environmental Group, believes New Zealand is destroying its reputation as a world leader in conservation, especially given the recent failure of attempts to create a marine reserve in the Antarctica's Ross Sea, and lacklustre efforts to protect Hector and Maui dolphins.

The organisation has backed a group of nine artists to take their "Wakey Wakey Wakey" exhibition on the Kermadecs to the Chilean capital Santiago. It opens at the Museo de Arte Contemporáneo, in the same week Key is in the city for talks with President Sebastian Pinera.

More than 50,000 visitors saw the works when they were shown in Wellington's City Art Gallery last year.  The artists spent a week in the Kermadecs in 2011 and the exhibition is aimed at getting public support for a fully protected 620,000 sq km sanctuary.

Golder says Chile has long admired New Zealand's 100 per cent Pure brand - and could be poised to steal our crown.

"The Chilean govt has embraced a future that combines utilisation of ocean resources and protection of the most special of its marine areas within large marine reserves," she said. "As countries connected by the Pacific, New Zealand and Chile have the opportunity, through marine protection, to give voice to a shared sense of guardianship of the largest ocean space on the planet and the peoples it sustains."

If Chile pitches itself as a global environmental leader it will play well in tourism markets. Adventure tourism is hugely popular in Chile, and it relies on a green image. Operators in the Latin American country are also exploring activities like whale watching and promoting its uninhabited Patagonia fjords, which are more remote than Milford Sound.

However, Key rejects Chile as a serious rival to the 100 per cent brand - pointing to their booming extraction industries. And he says New Zealand businesses have invested in adventure tourism in Chile.

"Whatever they do is a matter for them. You will get people pitching that argument but I don't think its going to stop them being involved in mining and a whole lot of other activities.

"Every country has got to determine its own brand."