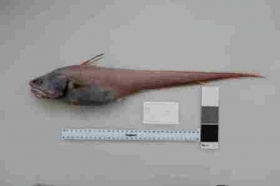 A specimen photograph of Coryphaenoides yaquinae. If confirmed with more detailed study at Te Papa, this will be the first proven record in New Zealand waters. Photo credit: NIWA/University of Aberdeen.

Today saw retrieval of the two landers and fish trap from depths of 5000-5500m. This is still on the abyssal plain between the Kermadec Ridge and Kermadec Trench, but is starting to become a steeper slope as depths drop away towards the Trench. The hadal lander was the first aboard, and with it came video footage of a rough and rocky seafloor. Unfortunately the camera power failed after just two hours, and in that time very few fish were seen. The abyssal lander however, worked well and showed rattails, cusk eels, and large penaid shrimps-although none appeared abundant. The fish trap caught only a single fish, but there was no disappointment as it was another new record for the New Zealand region, believed to be Coryphaenoides yaquinae. There was also a good catch of amphipods.

The specimens of Coryphaenoides armatus from yesterday and Coryphaenoides yaquinae today are helping to piece together our understanding of the distribution of deep-sea fishes. Although C. armatuswas known to occur, the specimens have confirmed it is relatively abundant in deep New Zealand areas (based on camera work). C. yaquinae is known from the North Pacific, (including the Japan and Mariana Trenches) and off Chile and Peru. But this is the first record in the Southwest Pacific, and proves a widespread Pacific rim distribution. For all of us onboard these are exciting results. 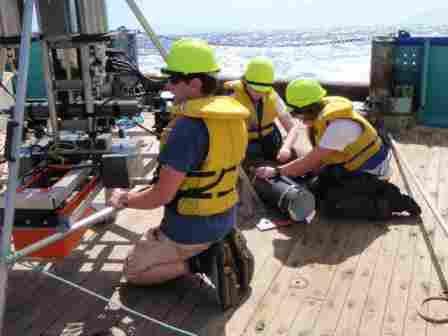 Amphipods haven’t featured much in the reports to date. But we are now approaching depths where things get interesting. The main species we have seen so far is Eurythenes gryllus, a worldwide species, and the second largest only to the “supergiant” Alicella. There was a good catch today, but we expect numbers to decrease as we go deeper onto the Trench. While in other trench systems Eurythenes is found as deep as 7000m, in the Kermadec Trench it hasn’t been found past 6000m, where we see other amphipod species dominate. We don’t know why, although one possibility being studied on this trip through genetic studies is the possibility that there is more than one species with different depth ranges, but they look the same-so-called “cryptic” species.

This afternoon we deployed the gear at around 6000m, and if the weather holds we hope to go deeper still the following day – into the Trench proper – to improve our knowledge of how faunal communities change in the deep.