The Kimberley coast is one of the jewels of Outback Australia. It is one of the most spectacular, unspoiled coastlines on Earth. This area is filled with a blending of tropical fjords with sandstone cliffs, mangrove forests, coral reefs, meadows of sea-grass and dramatic tidal flows. It is home to the world's largest humpback whale nursery and several striking natural areas like the Horizontal Falls. Yet only 5 percent of this extraordinary seascape is fully protected.

Despite its beauty and natural wonder, the Kimberley is under threat from mining and other industrial activities including:

In 2012, Pew commissioned research by the Centre for Conservation Geography hat found a 500 percent increase in mining exploration leases in the Kimberley since 2003. Several mines now are proposed, threatening eight out of 10 rivers, wetlands and floodplains. All of these areas are vital to the Kimberley coast.

Thankfully, this unique area can be safeguarded if the Western Australia government follows through with its pledge to create the Great Kimberley Marine Park. That is why the Kimberley Conservation campaign – an alliance of state, national and international environment groups  led by Pew's conservation efforts in Australia – is running a series of print, online and TV adverts asking that Australia's elected officials establish a Great Kimberley Marine Park.

Establishing a marine park would safeguard the region's whales and other unique wildlife and create a legacy for future generations. It's time for a Great Kimberley Marine Park. 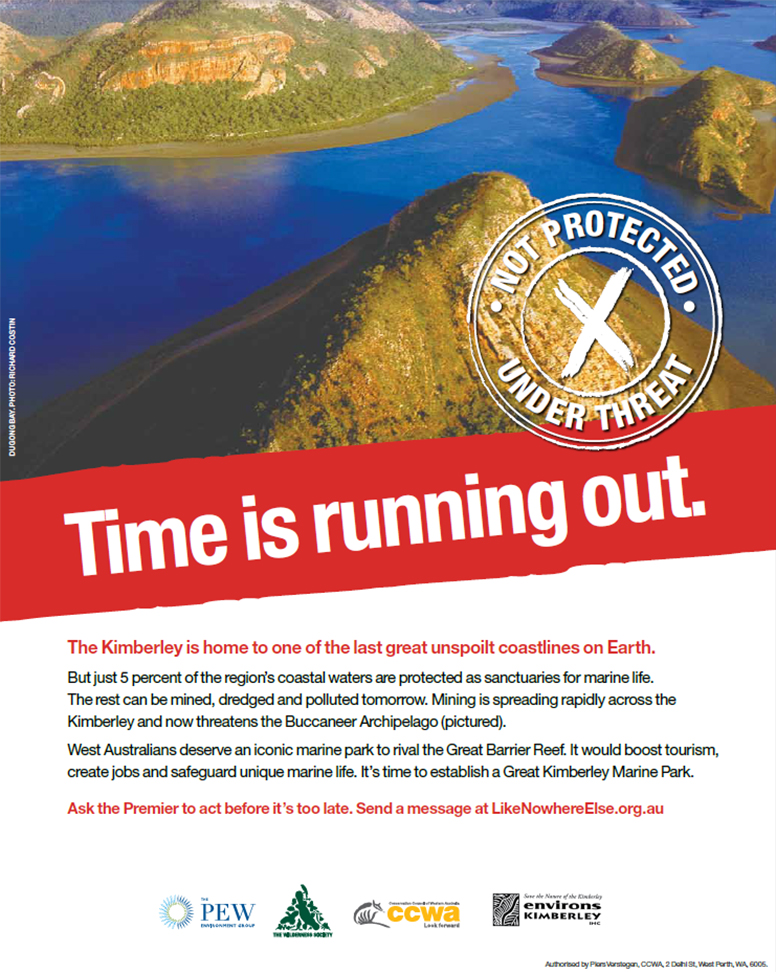