To get a country to curtail illegal fishing, it appears, will take more than public shaming. A January 11th U.S. government report to Congress listed 10 countries whose vessels are known to engage in illegal, unregulated and unreported (IUU) fishing on the high seas; five of the countries have made the list before.

The National Oceanic and Atmospheric Administration issues the report every two years and has committed to work with the identified countries to help end IUU fishing by their fleets. The previous report, issued in 2011, listed six countries.

“While it is encouraging to see the U.S. elevate its focus on IUU fishing, the government must take more robust action to stop this crime," said Tony Long, who directs Pew's work to end illegal fishing. “This list includes several repeat offenders and clearly shows that many foreign officials have ignored IUU fishing by their fleets with little fear of repercussions." Long added that the report "must lead to penalties and enforcement."

Italy and Panama have been cited in each of the three lists since the first report was issued in 2009, while Colombia, Ecuador and Venezuela are on the list for the second time. Rounding out this year's roster of problem countries are Ghana, Mexico, The Republic of Korea, Spain and Tanzania.

The United States is required through the Moratorium Protection Act to identify and take necessary action against countries involved in IUU fishing, as well as those countries that are catching sharks without quotas and landing sharks without their fins still attached. 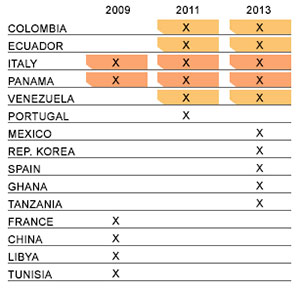 The 2013 list makes clear that, to stop illegal fishing, governments must do much more than just publically identify IUU offenders. Italy was cited as having vessels illegally use driftnets—massive nets that can be used to illegally target large species such as Atlantic bluefin tuna—on 114 separate occasions in the last two years.

Spain made its first appearance on the list due to two Spanish-flagged vessels engaged in activities that violated international fishery management agreements.

“The U.S. government should be doing a lot more to deter bad behaviour on the high seas, particularly for sharks” said Elizabeth Wilson working on sharks at the Pew Environment Group.

“Despite the Shark Conservation Act being signed into law in 2010 with requirements that the U.S. take action, shark products continue to enter the U.S. from countries that allow unregulated shark fishing and shark finning,” she added.

Pew is urging better coordination between the European Union and the United States to take action against countries cited in the list. In addition, more effective measures need to be taken at the level of Regional Fisheries Management Organizations (RFMOs), such as the mutual recognition of IUU vessel lists.

Vessels can be listed as an offender by one regional body, but remain on the list of licensed vessels by another. This allows illegal operators to keep fishing and making profits. Increased cooperation among all countries responsible for policing illegal fishing is vital to end fisheries crime.

Interviews and analysis of the report are available on request:

Detailed information from the report

The report can be found on the NOAA website.

The NOAA 2013 report identifies ten countries: Colombia, Ecuador, Ghana, Italy, Mexico, Panama, Republic of Korea, Spain, Tanzania and Venezuela. Since 2009, none of the identified countries has been subject to sanctions, despite the recurrent listing.

Colombia: Three Colombian vessels, the Nazca, Cabo de Hornos, and Maria Isabel C, finned sharks and discarded the carcasses at sea before the point of first landing, in violation of IATTC measures.

Ecuador: The Drennec finned 14 sharks and discarded the rest of the animal in violation of IATTC measures.

Mexico: One vessel, the Atún VII, finned sharks and discarded the carcasses at sea, in violation of ICCAT measures.

Panama: The Delia finned a shark and discarded the carcass prior to the point of first landing, in violation of IATTC measures.

Republic of Korea: Reports from the 2011 ICCAT meeting indicated that Korean nationals may have been involved in the at-sea transshipment of Atlantic tropical tunas harvested by large-scale purse seine vessels operating in the Gulf of Guinea. Such transshipments are prohibited by ICCAT.

Panama: The Contadora I and Delia discarded 22.8 tonnes of tuna in violation of IATTC measures.