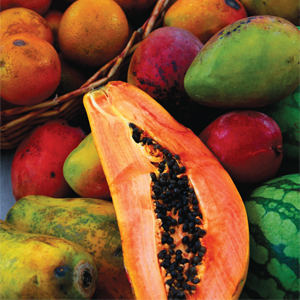 Unlike other states, Hawaii operates as a single school district statewide across all islands. During the 2007-08 school year, the Hawaii Department of Education began revamping its school nutrition program in order to meet the State of Hawaii Wellness Guidelines, which were required to be implemented over a four-year period.

Some of the Solutions

Hawaii Public Schools implemented numerous changes— from eliminating sugar-sweetened beverages and less healthy snacks in vending machines, to removing deep-fried foods from menus, and serving a 50/50 blend of white and brown rice. A la carte items that were sold separately from school meals were made available only to secondary students, and included healthy options such as juice, water, and fruit. The district also integrated more local produce into the menu—including soybeans, papaya, melons, and corn—and prepared bread items in-house with at least 50 percent whole wheat ingredients. In addition, the district began serving only nonfat milk.

Hawaii schools have made considerable progress moving away from menus that largely featured processed foods to ones with more made-from-scratch recipes prepared in-house. When the initiative began in 2007, very few school meal menu options were prepared in-house; today 20 percent of entrees are. According to school nutrition administrators, increasing the volume of fruits, vegetables and whole grains, and then using them in meals prepared from scratch has not resulted in significantly higher food costs. This is partly due to prudent menu planning and carefully negotiated vendor contracts. Labor costs are comparable to pre-implementation, and food costs have remained steady at about 30 percent of total meal cost. 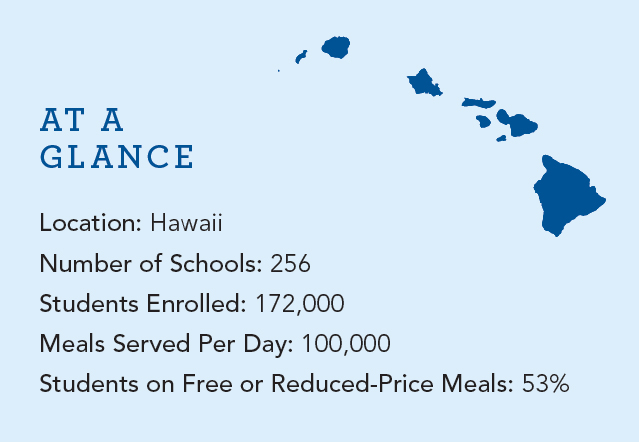 One of the most significant challenges the district faced was the reduction of vending machine sales, which traditionally supported a variety of school activities. District officials report that a successful shift to healthier fundraisers, including Christmas tree sales and “farm-raiser” initiatives—in which students sell local farm produce—has allowed the district to maintain revenue.

Hawaii Public Schools has found success in tackling the issue in a comprehensive manner. They modified vending machine and fundraiser sales at the same time they updated school meal menus. To support the changes, the district found creative ways to engage students in learning about health and nutrition through cross-curricular lessons and activities.