The conservation outcomes from a week-long meeting in Manila, Philippines were mixed as 25 governments strengthened protection for whale sharks and took some action on illegal fishing, but failed to stop overfishing of bigeye tuna in the Pacific.

“Governments at the Western and Central Pacific Commission (WCPFC) annual meeting talked about doing the right thing and made some progress on key issues, but when it came down to the wire, they failed to end overfishing of bigeye tuna or take broad decisions for sharks,” said Gerry Leape, Pew's delegation head. “This continued impasse, where countries fail to work together, needs to end. If not, it's likely that governments will return year after year to discuss the worsening state of fish stocks.”

Big Win for Whale Sharks, No Action for All other Sharks 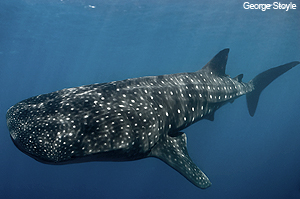 The commission adopted a proposal to ban setting of purse seine nets around whale sharks, which are assessed as ‘Vulnerable' by the International Union for Conservation of Nature (IUCN) and are listed on Appendix II of the Convention on International Trade in Endangered Species of Fauna and Flora.

Vessels fishing for tuna use this method because tuna tend to aggregate under the sharks and other large floating objects. But, because the whale sharks become entangled in the nets, this fishing method often leads to their deaths.

The new tuna commission rule also requires fishing vessels to try to free any whale sharks accidentally caught and requires that vessels report any incidents involving whale sharks. A similar measure was considered at the last meeting in Guam, but failed.

“We are encouraged to see this measure to protect the whale shark and prevent further decline of this threatened species,” said Angelo Villagomez, of the Pew Environment Group's global shark conservation campaign, who attended the meeting this week. “It is unfortunate, however, that that no other positive action on sharks was taken.”

That means another year will pass during which the vast majority of shark species in the Pacific won't be managed by WCPFC.

While some countries in the region have been extremely proactive by declaring their waters in to shark sanctuaries, most have done little to prevent the decline of shark populations. Since sharks are highly migratory and are caught across jurisdictional boundaries, improved shark conservation at both the national and WCPFC levels is vital.

During the same meeting, governments could not agree to follow the advice of the commission's own science advisers, who called for catch reductions of juvenile and adult bigeye. As a result, this species will continue to be overfished.

The commission failed to take any management measures on the use of fish aggregating devices (FADs), which are used by fisherman to attract tuna and other fish in the open ocean.

FAD fishing operations catch the majority of bigeye tuna in the WCPFC area. A Pew analysis released at this meeting revealed that an estimated 47,000 to 105,000 FADs are deployed worldwide to catch tuna. Commissioners were unable to agree to collect better information on FADs which are being used at record numbers with unknown consequences.

“Governments spent the week debating how much bigeye tuna overfishing to allow, rather than how to set limits that manage this stock sustainably,” said Adam Baske, a manager of the Pew Environment Group's global tuna campaign. “This is deeply disappointing and rejects the current science.”

High seas areas for purse seine fishing will remain open to the Philippines. No action was taken for the world's largest bluefin tuna fishery, despite this tuna being subject to overfishing, with the population in decline.

Progress Made on Vessel Control

Flick the Switch will lessen the possibility of boats going into zones to illegally fish.

In a first for this region, all vessels will soon have to switch on vessel monitoring systems (VMS) when passing through the exclusive economic zones of WCPFC member countries from high sea areas. A VMS consists of an electronic device that records the position, speed, and course of a vessel and provides a system to track commercial fishing boats.

This initiative championed by the U.S. and Pacific island countries is called Flick the Switch. It will lessen the possibility of boats from going into zones to illegally fish.

In another first for the western and central Pacific, a commitment to develop a catch documentation scheme was also made. Completion of this scheme will result in the tracking of fish from sea to shelf, the monitoring of catches, and a reduction in the possibility that illegally caught fish will be offloaded.

Progress was also made on mandating vessels to have individual ID numbers, like license plates on cars, so they can be tracked and monitored. Although this was not endorsed at this meeting, discussions to develop recommendations for the next annual meeting will be high on the agenda for the next technical subcommittee of the body in 2013.