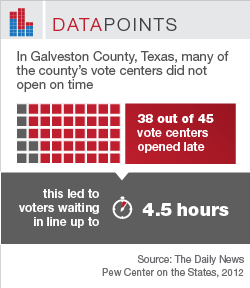 Election Day did not get off to a smooth start in Galveston County, Texas. Unfortunately it didn’t finish well either.

The county was using vote centers for the first time during a presidential election, which allows voters to cast their ballot at any polling location. Of the 45 centers in the county, 38 reportedly did not open on time, leading to waits of one to 4.5 hours for some voters and prompting a judge to extend voting by almost two hours.

State law requires a zero-out report on Election Day—printing out all races on every voting machine to ensure no votes have been recorded before polls open. The challenge with doing this in a vote center county is that each voting system has every possible ballot programmed into it—and they all must be printed out. In some cases the machines ran out paper and then had to be restocked. County election officials said this took much longer than they expected.