American Samoa, a U.S. territory in the Pacific Ocean, implemented a series of measures this week to protect sharks within its waters. Shark fishing is now banned in its territorial waters, and the sale, possession, and distribution of fins and other shark parts, is prohibited.

“Sharks have been an important part of our ocean, reef and cultural environments,” said Gov. Togiola T.A. Tulafono. “Their disappearance would be devastating to the environment and our samoan culture. An ocean without sharks is completely inconceivable to me. Sharks have supported the health of our ocean, our fisheries and our economy, and should remain that way for generations to come. American Samoa is committed to playing a serious role in ensuring that these wonderful animals survive for our future.” 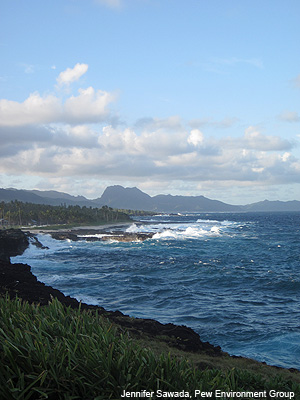 Changes made to American Samoa's fishing regulations by the Department of Marine and Wildlife Resources support an executive order the governor signed in August. American Samoa is the final U.S. territory in the Pacific to forbid the trade of shark fins. The Northern Mariana Islands and Guam banned the practice in 2011. Hawaii also outlawed the trade of shark fins, in 2010.

At the top of the food chain, sharks are critically important to maintaining balance for marine life. A recently released scientific study showed that only 4 to 8 percent of American Samoa's historic reef shark populations remain. Globally, up to 73 million sharks are killed each year, largely for their fins to supply the demand for shark fin soup.

“Their decline has risks for ocean health, but it's not too late for American Samoa's sharks,” said Mike King, director of the Coalition of Coral Reef Lovers. “By taking action to protect the sharks of American Samoa, Samoans not only preserve their natural living resources but the linkage to the ocean that is so important to their heritage, Fa'asamoa, the Samoan way of life.”

Check back with us for more about American Samoa's new shark protections.