More and more people are turning to the Internet and social media to get election-related information. A recent report by our colleagues at the Pew Research Center's Internet & American Life Project shows that, not only are around 60 percent of American adults using social networking sites such as Facebook or Twitter, but about two-thirds 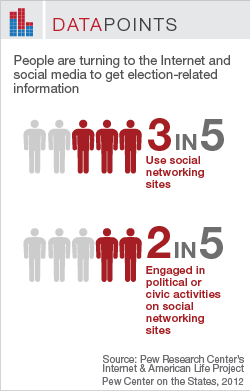 of those users—almost two out of every five American adults—have engaged in political or civic activities on those sites. They also report that about 35 percent of social networking users have used these networks to encourage others to go vote.

State election offices are also beginning to engage with voters to respond to questions about the nuts and bolts of voting. Pew Center on the State’s 2008 Being Online is Not Enough report found that putting important information, specifically voting information, online is most helpful to voters when that information is presented where users look for it the most: increasingly search engines and social networking sites.

Many groups are meeting this demand, including the Voting Information Project (VIP).

Using an open-data format, VIP uses official voting information from election officials to provide voters with customized tools to answer questions like, “Where do I vote?” and “What is on the ballot?” VIP has developed partnerships with Google, Microsoft, Facebook, and Foursquare to make these tools available on over 500 Internet and mobile sites such as VoterHub—including media, campaign, and interest group websites—before and on Election Day.